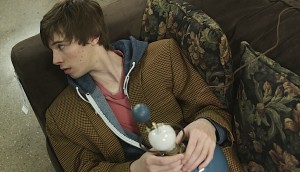 “Nate & Margaret” are unlikely bosom buddies in the first feature by Chicago filmmaker Nathan Adloff, a buddy movie that pairs a nineteen-year-old gay film student (Tyler Ross) and a woman in her fifties, a Rogers Park café waitress, who has hopes of becoming a stand-up comedian with material inspired by her parents’ abusive relationship as well as her own indifferent fortune. Natalie West shuffles amiably; Margaret’s confidence grows as a performer the more open she is about the damage. As does Nate’s, as he meets someone his own age who happens to like him, and to be of the same sex as well. Ah! A first boyfriend. It’s a gentle geek fable with a light, platonic “Harold and Maude” vibe; dramatic complications involve any number of cruel words spoken in anger. Gaby Hoffmann plays a fellow film student who’s full of herself, bragging on her “sick, nasty” parties and asking clumsy, inappropriate questions as if she were the brightest princess of them all. Practical locations across the city, including in Rogers Park, Humboldt Park, local thrift stores, the Loop and Lake Michigan’s bike paths mesh neatly. Modern technology does a lot of things, including ennoble the glittering deep dark Chicago skyline from a particular rooftop in West Town late into the night. Adloff attended SIU at the same time as Joe Swanberg, and was in the cast of Swanberg’s web series “Young American Bodies,” an experience Adloff has cited as an inspiration. Chicago International Film Festival majordomo Michael Kutza has a curt cameo as a comedy-club patron. There’s also a brief scene with Hoffmann in the end credits that suggest a cruel, bitter, wonderful movie left unmade. Co-written by Justin D.M. Palmer. 78m. HDCAM video. (Ray Pride)

“Nate & Margaret” plays Siskel Friday, Monday and Tuesday. Adloff will appear at all screenings. West and McCahill appear Friday. The trailer is below.