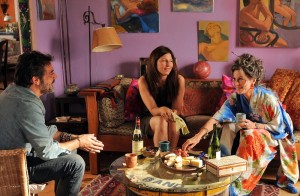 “Eugene O’Neill’s plays could be cut in half,” a verbally characterized philistine says at a New York dinner party at the opening of “Peace, Love, and Misunderstanding,” to which the host adds, “Or better yet… abandoned altogether!” Later, as the characters make their way to Woodstock to meet long-estranged grandmother of Manhattan lawyer Catherine Keener’s teen children, punch-the-hippie jokes take center stage in turn. Credited director Bruce Beresford  has been a capable journeyman most of his thirty-plus-film career—”Driving Miss Daisy” pleased a few viewers, and “Tender Mercies” remains a splendid acting showcase—but no one is well-served by Christina Mengert and Joseph Muszynski’s glib and often shallowly patronizing screenplay. (His “Mao’s Last Dancer” (2009) was splendidly marketed to an older crowd around the world.) Their central conceit, described in the press notes as “a funky and far-out septuagenarian who seems to be living in a free-spirited, pleasure-seeking 1960s past only to discover a new future in the grandchildren she’s never met,” comes to fluttery life in the flesh of seventy-four-year-old Jane Fonda, who still deserves a late-career equivalent to “On Golden Pond.” This would not be that. “I barter! I sell my art!” is ironic and thin dialogue offered up to the former Mrs. Ted Turner. Anyone with admiring memories of “Klute” or “Coming Home” should step aside. Kind-eyed Keener provides a center for the forced goings-on. What’s so funny about “Peace, Love, and Misunderstanding”? Not much beyond the Oxford comma in the title. Plus! There are extended “rustic” montages with video-camera frames around them, as well as group singing. With Rosanna Arquette, Chace Crawford, Kyle MacLachlan, Katharine McPhee, Jeffrey Dean Morgan, Elizabeth Olsen. 96m. Widescreen. (Ray Pride)