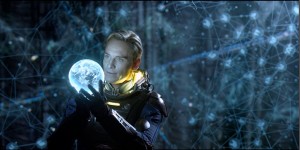 “Prometheus” is a glorious triumph of cinema as spectacle, of movies as atmospheres and quicksilver instants of human reaction and bombastic bursts of large-scale action and sound and symphony. As a traditional commercial movie? For those expecting fully explored themes, rather than jabs of implication, or dynamically structured exposition and traditionally paced emotional catharsis, from one of the most gifted art directors who ever became a film director, it may turn out to be something else altogether.

The camera races across the rangy, gorgeous impossibility of a landscape that is in fact Iceland: what world or worlds is this? We won’t know for a while. But it’s gratifying to settle into one huge Ridleygram. In space, a robot, David (Michael Fassbender), that wants more to be Peter O’Toole in “Lawrence of Arabia” than just human, prepares a trillion-dollar ship for its crew to wake. (His role is a hall of makeup mirrors, playful, oblique, inescapably sinister.) The Prometheus nears its destination across the universe, riding the soft shear of Saturn-like rings. A crew of seventeen has been sent across the universe to validate the research of two scientists, a couple (Noomi Rapace, Logan Marshall-Green). On earth, they found what they believe to be clues to where our makers flew from beyond the stars. Weyland, an elderly moneyed muckety-muck (Guy Pearce), has financed their way. All the right questions are asked, but how are the answers dramatized? Are any offered at all? “Big things have small beginnings” is a characteristic gnomic shrug of dialogue.

Ridley Scott. Sir Ridley at seventy-four. In an interview with the website “Bleeding Cool,” co-writer Damon Lindelof said, “When you ask questions that the movie doesn’t definitively answer it’s a double-edged sword. Some people will be completely, totally creatively engaged by it. Some people are going to be pissed off by it. That only galvanized him more because if there is one thing Ridley loves doing, it’s pissing people off.” As for his own aims, Lindelof continues in that interview, “I will always err on not giving you enough.”

Scott and company take advantage of what writer David Simon calls “the Google effect.” In a profile of his series “Treme,” Simon said, “If I can make you curious enough, there’s this thing called Google.” As writer Emily Nussbaum elaborated, “The Internet, he suggests, can provide its own creative freedom, releasing writers from having to overexplain, allowing history to light the characters from within.” Still, the script, credited to Lindelof and Jon Spaihts, has a range of flummoxing absurdities, beginning with being asked to believe that a flight crew on a mission this scale hasn’t trained together, and will meet only after waking from two years of sleep, a “Lost”-like congregation. Even with that series’ clandestine patterning, the crew of the Prometheus, you’d think, would be designed with more than passenger-list happenstance. Scott’s intense visual imagination, which includes consistent, emphatic patterns of crosscutting once the sustained action kicks in, is applied to the screenplay’s often delicious, sometimes delirious faux-profundity. There could easily be an hour or more of narrative that could be added, which don’t even include the clever bits of transmedia released earlier that aren’t used onscreen, like the industrialist Weyland’s 2023 TED talk, with Guy Pearce still his middle-aged self. Two hours seems both skimpy and overly eventful.

In one of the terror setpieces, shallow rivulets of tar-hued goo run along the pyramid’s floor, as if they are trapped in a rundown ruin of a cineplex. At moments, there’s more “Blade Runner” in the pressurized air than “Alien,” and an undercurrent of Roy Batty’s line from that film, “Quite an experience to live in fear, isn’t it? That’s what it is to be a slave” streams through the robot David’s ruminations. There’s so much about fathers and wanting to know or vanquish the father in Scott’s origin-of-life man-vs.-machine trilogy as well. But the humans in “Prometheus” are enslaved by the idea of what it is to have Gods and not know their desires.

Beyond all the implications that are introduced or suggested, the cinematography is bold and crisp and the landscapes bright and rich and huge: this is a world, and a world removed from the cloacal confines of that space barge named Nostromo. Most stellar is the aliens’ navigation system to the stars, playful pinpricks that dance and describe star fields and planet clusters at far remove. It’s the celestial GPS Leonardo never got to cast. The most incendiary confrontation is a stirring challenge that also falls flat: where brute efficiency ought be honored, the character that wields fire and exacting fittingly Promethean righteousness is horrified to have done the deed instead of gratified. Nothing glitters in the dark near the Tannhäuser Gate but there is lyrical visual fury. The concatenation of climaxes is willfully self-contradictory, a succession of clock-ticking of life-and-death challenges that repeatedly punch holes in what came before. There is an awful lot for audiences to talk about afterward.