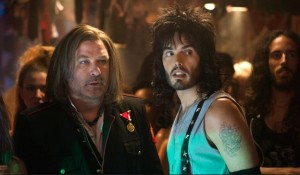 Rated not appropriate for sober audiences. That Tom Cruise was willing to be filmed in ass-baring leather chaps not only tells you everything you need to know about “Rock of Ages,” but it also disproves any notion that the man takes himself too seriously. Nor does this jukebox musical ever take itself seriously, sending up the 1980s with its big hair, insanely bad fashion and parodying the moment when hip-hop was co-opted for boy-bands on MTV. Not only does Cruise do an unexpectedly credible job of channeling Axl Rose at his most cliché-ridden excess, but Paul Giamatti sings, after all. “Rock of Ages” is musical theater fantasy camp for movie stars who not only let their hair down, but grow it out and look unapologetically foolish. A duet with Alec Baldwin and Russell Brand is ridiculously priceless. Catherine Zeta-Jones leading a chorus line recalls the absurdity of a similar scene with Meryl Streep in “Mamma Mia.” And I say all this as a compliment. Sometimes? Big dumb fun is OK.

The plot’s not worth discussing, since it’s a variation on every Hollywood-Broadway story ever told: the wide-eyed innocents coming of age on the big stage. The teen-friendly couple at the center of the story (Diego Boneta and Julianne Hough in a turn far more virginal than the Broadway show) may drive the plot but they’re hardly worth caring about. The filmmakers might think they’re crafting a “Grease” for our time, but this one’s destined to be a midnight movie, a singalong Sound of Muzik for the twenty-first century. The theatrical version, which has been a big enough hit that it’s rolled through Chicago twice on tour and just settled in for a summer-long run at the Broadway Playhouse, made a big deal about selling beer in the theater itself. Producers understand: This is a show best experienced with a buzz. It’s about time that  LA’s dirty boulevard, its rock ‘n’ roll heyday, gets its day. Only here dirty rock boys are not so dirty: especially since this Sunset Boulevard was filmed in Miami. (Brian Hieggelke)