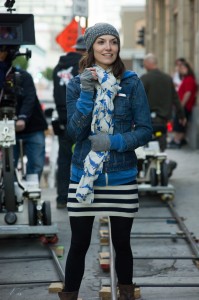 “We’re fucked, Bob,” the reporter in the field says. “Thank you, Amy,” the anchorman says back in the studio.

In Lorene Scafaria’s “Seeking a Friend for the End of the World,” plopped right down in the final weeks before an asteroid is predicted to smash into the planet and set it ablaze, the best moments are not the most serious, or the most funny, but the ones where the characters are given quiet dignity outside of the spectacle of certain extermination. The scenes where the increasingly rumpled yet completely professional newscaster updates what’s going on outside of the meet-brute of two New York neighbors who’ve managed never to meet, lonely man Dodge (Steve Carell) and scatty girl Penny (Keira Knightley), are eye-opening but also integral. But it would be remiss not to mention the fun-fun-fun chain restaurant they find at the end of the road near the end of the world where everyone is happy to go about their jobs with just a little help from the letter “E” as well as the house party where Patton Oswalt thinks it’s time to do heroin while listening to Radiohead.

Unlike panoramic movies about the end of the world like “Armageddon” (1998) or “Melancholia,” (2011) Scafaria, who wrote “Nick and Nora’s Infinite Playlist” (2008) is more pano-romantic, staying as close to her characters as possible, even pushing in with a snap zoom from close to closer up and a key moment near the End. It’s closer in spirit to small-scale apoca-operas like Steve De Jarnatt’s nuke-jangled “Miracle Mile” (1988) and Don McKellar’s pre-9/11 emptying-out of Toronto, “Last Night” (1998).

After a cheerful introduction, I had to ask, cheerily, “What were you thinking?” She laughs what turns out to be a friendly and frequent laugh. “I was thinking about a lot of different things over a decade of time, really. What was I thinking! I’ve always been obsessed with these big themes, whether it’s love or death, time and how we spend it. I guess I had a kernel of the idea dating back to the late nineties when these sort of end-of-the-world movies were all the rage. Even things like ‘Day After Tomorrow,’ you’d be watching the film and you’d be most engrossed in the relationships, the big storyline besides, ‘Are they all going to make it?’ I always wanted to see what the guy that likes the girl at that point in time would be doing. I really wanted to make an epic story that was very intimate and more grounded in the characters.

“After 9/11, especially,” she continues, “I was watching people’s behavior change and seeing how people in New York were looking each other in the eyes for the first time in a long time. I had just moved to L. A. a week before it and felt completely isolated out there and desperate for human contact. But around the time of ‘Nick and Nora’s’ coming out, I wanted to tell a story that had a really loud ticking clock, as opposed to ‘Nick and  Nora’s,’ which felt like it could go on forever. I was excited to see what would happen between two people if you took ‘forever’ off the table. I asked a bunch of people I knew, I compiled research that way, got personal with people.”

Three notices are legible on a paper-strewn wall at the very beginning, a cruder version of the post-9/11 Union Square message boards: “Hire an assassin.” “Fuck a virgin,” and then the main title, “Seeking a friend for the end of the world.”

“‘Fuck a virgin.’ Yeah. Yeahhhh. I was trying to think what would be out and about at that point. I do think certain people would be praying for death and other people would be going hog-wild.”

The story starts in media res, as in “Groundhog Day,” a movie that was endlessly resistant to explaining what came before, explaining how the physics would work. Set up a world in the first ten minutes. “Right. If they believe it, if the characters are in it… I know Bill Murray couldn’t believe it for a while! But if the characters are actually facing it… I certainly never wanted to see it, to raise many more questions about [what’s happening to] the earth. We know what it looks like. I looked up online, there’s a terrifying simulated video, I think Pink Floyd plays, where it shows what an asteroid this size would do and how long it would take the fire to surround the earth. It takes seven minutes. It’s pretty nuts.” She laughs again. 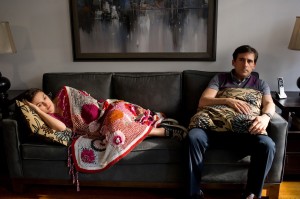 The serious issues aren’t ignored amid the characters Dodge and Penny meet on the road, especially with spring-loaded lines like “You can’t run, Dodge” and “No, nobody’s anybody’s anything any more.” There’s a rhythm that’s just right. It sounds like dialogue, then thesis statement, then funny… and just melancholy. “She [Connie Britton] says that so great. To conquer these larger ideas of what it means to lose time altogether, and in the simplest, quickest ways with characters you meet in fleeting moments, that was the challenge. I wanted to pack as much of that in there as I could. Obviously, a line like that can be seen as funny, but it’s pretty… it’s both. ‘Nobody’s anybody’s anything any more,’ that line stayed that same forever, because, it says, our possessions are gone, and we certainly never own people to begin with, and at this moment, we belong to no one is a really interesting thought.”

“Seeking A Friend for the End of the World” is expected to hit on Friday. The trailer is below.