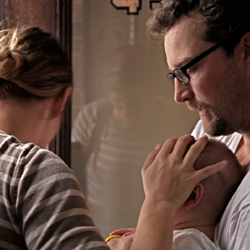 Chicago filmmaker Todd Looby world-premieres his second feature, “Be Good,” an anecdote about the stress and aggravation of young parenthood after mom Mary (Amy Seimetz) returns to an office job while stay-at-home dad Paul (Thomas Madden) types away at screenplays with Latino characters like “El Flaco” threatening each other with guns that look like the basest, unmarketable trash. Baby’s a troublemaker and the family retriever’s a bounder; household rubble and rubbish tumble in their wake. Characteristic Chicago apartments, decks and side streets co-star. Finding a profile of local filmmaker and father Joe Swanberg in an online “DIY Director” publication, “Get the fuck out of here” is Paul’s immediate response to reading that Swanberg was (as in real life) finishing his eighth or so short feature of the year. “You’ve got to be fucking kidding me.” Unlikely mentorship ensues as well as the most consistently agitated child performer on display in a local production in memory. “If you think that it’s unfair that your wife works while you don’t make money making films, I’d say, get a job,” “Swanberg” says. “I don’t think movies will make you happy… Playing with a baby has the potential to make you way happier than movies do. So you get to do this now.” Thirtysomething life crisis: Engage! Insert: Inciting incident! Prove “Swanberg’s Truth”! Curtain. With Looby, Bill Phelan, Paul Gordon, Jude Swanberg, Tessa Day Looby. 63m. HDCAM video. With “Lollywood,” Looby’s short about “a dynamic ninth-grade Liberian auteur.” (Ray Pride)

“Be Good” world-premieres at Siskel. Looby will appear at Friday-Wednesday screenings.