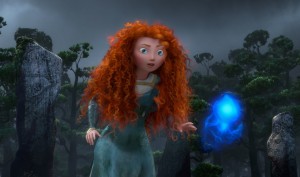 A mother-daughter story with mischievous boy triplets underfoot and a forest full of big bad bears and bitter witches, “Brave” may be the most traditional of Pixar’s thirteen features, but the production’s sheer physical beauty and creature-comfort bumptious comedy still manage to impress. Set in a mythical Highlands of Scotland of some century or other, the computer-animated textures are more organic-seeming than any I know: the skies are blue, the shadows of night are dense, and greenery is more lush than nature ever bothered to calculate. Princess Merida (Kelly Macdonald), a skilled archer and even more skilled tomboy, rebels against her fate: there are lessons but suitably subtle in their unfolding, as we realize her tutoring in education and elocution prepare her for the attainable, doable challenges that will face her soon enough. “Perfection” sounds mighty nice in the not-too-broad Scots of the voice cast, which includes Billy Connolly as blustery King Fergus and Emma Thompson as Queen Elinor, whom Merida punishes more than she knows. As a little girl, Merida has waist-length rag-doll ringlets of red, and when she finally grows to full teen stature of willow-sway, she transforms into a marvel of contemporary animation mathematics, a full flower of alluring flame swirling from countless ones and zeroes, wide eyes centering a mad, dousing, dazzling bower of shoulder-length bounding red curls, like yarn and flame and boundless energy, with jokes and yearnings spoken in Macdonald’s precisely modulated lilt. This algorithm of follicle physics enables a quintessence of red-headedness that never once fails in its jounce and unjaded esprit. Merida fights bears and bear-hunters alike, ideally to discover there’s no heart like mom’s. There are child-rattling moments of fear, to be sure, and comedy bits that would not be out of place in the Warner Brothers cartoon shorts of Termite Terrace days. Directed by Mark Andrews and Brenda Chapman. With the voices of Robbie Coltrane, Julie Walters, Kevin McKidd, Craig Ferguson. 93m. (Ray Pride)