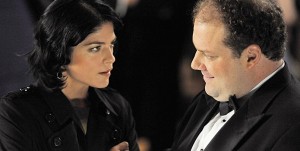 “Dark Horse” demonstrates more surface affection toward his characters than Todd Solondz’s other films, including the recent “Life During Wartime,” but it’s his willingness to let them move toward middle-age with no (literal) children in sight that makes this dark comedy a compelling step forward for this skeptical, pessimistic inquisitor. (As co-producer Ted Hope has put it, “When I read the script, I was surprised: it contained no molestation, no masturbation, no rape, no incest.”)  Thirty-five-year-old Abe (Jordan Gelber), an overweight college dropout who works for his father, lives at home in New Jersey with his parents (a smothering Mia Farrow, a desiccated Christopher Walken with woeful hair), still collects Simpsons action figures in his bedroom and tools around in a Hummer lined with the sounds of cheeky girl pop. Even his simplest forward motion is gallingly unearned: he’s a live wire in a life of pudding. It’s the bitterest pill of the dysfunction family and relationship satire. Several reviewers have fixedly compared Abe to “Seinfeld”‘s George Costanza character, which Solondz has cemented by including off-screen lines from a nonexistent “Seinfeld”-like sitcom that includes Jason Alexander’s voice. (That’s the most “meta” storytelling aspect of a relatively straightforward narrative.) Abe meets a depressed woman, Miranda (the sublimely wilting Selma Blair, who can play panicked, forlorn, resigned, weary, uninvolved or neurasthenic at the crease of a breath or the wisp of exhaled cigarette smoke), who’s moved back home to her parents’ as well after personal and professional disasters in New York City. Is Miranda depressed enough to date the monstrously confident but underaccomplished Abe? (Yes.) But even his father’s secretary will warn him: “She’s too good for you. You haven’t got a shot.” But Miranda will say, “Are you for real? And you’re not being ironic? Like… performance art or something?” Still, as in any Solondz joint, spoken banalities pile on like logs from a lumber mill, crushing any and all downstream. “Not that I’m an expert on these things… but maybe you should take a little less medication.” More intriguing is Abe’s descent (ascent?) into fantasies, each seen as straightforwardly as in a film by Buñuel. (Watch out for the older woman who calls him “Kiddo.”)  Why should we care? Why do we care? Honestly, we do. The last shot is a nimble back flip of point-of-view that crashes like a wall of bricks as it cuts to black. Able cinematographer Andrij Parekh’s filmography includes “Blue Valentine,” “Half Nelson” and “It’s Kind Of A Funny Story.” With Justin Bartha, Donna Murphy. 84m. (Ray Pride)

“Dark Horse” opens Friday at Landmark Century. The trailer is below. “Dark Horse” also plays June 30 and July 6-12 at Facets.