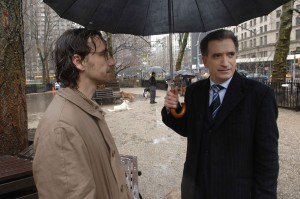 “In the tradition of ‘Demonlover’…” is an encomium likely only to be inspired by one of documentarian Michael Glawogger’s excursions into stylish fiction, and appropriate in “Kill Daddy Goodnight” (Das Vaterspiel, or, The Father Game, 2009). Drawn from a novel by Josef Haslinger, “Kill Daddy”‘s antihero, Ratz, is an Austrian hash-head and game designer harboring a deep and abiding hatred for his father. Through contrived but not necessarily convenient circumstances, the film becomes an expressive tangle of drama and a little comedy through several plot lines about the legacy of guilt, including game design, virtual patricide, the Y2K virus, home renovation, Nazi hunters and a Lithuanian war criminal who’s hidden in a Long Island basement for over three decades. Set in 1999, ancient computer monitors and dot-matrix printers and lost-to-time proletarian apartments mark Europe; the United States must, of course, have a pretty woman, an ex-girlfriend, in the middle of the frame. Glawogger has an eye for interiors and locations, filing the frame with stylish cosmopolitan-leaning bumf, grime and snow and noodle shops. The textures are reminiscent of those in his memorable, assured documentaries, which include the weighty “Workingman’s Death” (2005) and the recently released “Whores’ Glory.” You’ll make connections for yourself, as with Assayas’ 2002 globe-girdler and mind-bender, or not. With Helmut Köpping, Christian Tramitz, Sabine Timoteo, Ulrich Tukur, Itzhak Fintzi, Michou Friesz, Otto Tausig. 110m. HDCAM video. (Ray Pride)