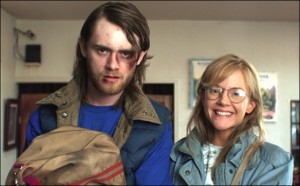 Modest yet intermittently enthralling, Robbie Pickering’s eccentric road movie “Natural Selection,” a favorite at SXSW 2011, makes intergenerational quirk seem as logical as the way your own relatives behave, which to say, not very logical at all. Pickering shows a refined knack for finding a bright line between comedy and caricature in his story about a disillusioned Christian woman who sets out to locate a son her hypocritical husband spawned via a fertility clinic. Rachael Harris, who played “The Hangover”‘s fiancée, goes without makeup, with rich human and comic reward. A raft of technical limitations don’t impede the performances. With Matt O’Leary, Jon Gries, John Diehl, Gayland Williams. 90m. (Ray Pride)