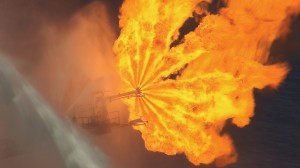 Canadian documentarian Jennifer Baichwal and novelist-activist Margaret Atwood collaborate on “Payback,” an examination of how the concept of debt shapes the structure of civilization today. Based on Atwood’s 2008 Massey Lecture,” Payback: Debt And The Shadow Side of Wealth,” the film strives to be a poetically suggestive, even lyrical examination of the world economy. Baichwal’s films like “Manufactured Landscapes,” which courses through the terrible beauty of heavy industry-ravaged landscapes as photographed by Edward Burtynsky, have pictorial gravity to spare. “What it is about is the idea of debt—a fantastic, complex riff on all the ways we are governed by owing and being owed in human society and beyond. “I owe you one.” “You owe me one.” “And so on,” is how Baichwal simplifies Atwood’s thesis. Subjects like Albanian revenge killings alternate with others with tenuous connections to the concept of “debt to society,” such as ex-convict Lord Black of Crossharbour, formerly Canadian citizen and former owner of the Chicago Sun-Times Conrad Black in tacky surroundings, reading aloud from a text asserting his innocence from charges of fraud, complaining about his treatment by the U. S. legal system and waxing purple about the fate of his fellow inmates. Baichwal retains his stumbles and odd expressions as he rumbles things like “You don’t want to discourage merit and superior talent,” he says from behind the gold buttons of his blue blazers and his neatly creased, legs-crossed khaki chinos. “But you don’t want superior talent asserting itself by brute force or, or, what we might call misdirected cunning.” A bit more directed cunning might have been called for. Scattered rather than dense, fixating on smaller, anecdotal details, the weave of “Payback” never elevates keen and even witty moments into a case for what “debt” truly means even as we observe countries in Europe falter one by one and repercussions echo from border to border worldwide. Having watched hours of less-than-fluent documentaries about the Greek “crisis,” as well as other attempts to deal with the plutocratic pressures and trade-inequity fissures of the ongoing moment, I’d be grateful to see a filmmaker who could wrestle this bear market to the ground. However good the moments that Atwood and Baichwal bring to bear, “Payback” still feels like a miniseries waiting to be unwound, extracted, expanded, its proper form yet to be found. Nicholas de Pencier’s photography is, as in other films by Baichwal, admirable work. With Raj Patel, Louise Arbor, Karen Armstrong, William Rees. 86m. 35mm. (Ray Pride)

“Payback” opens Friday at Siskel. The National Film Board of Canada trailer is below.