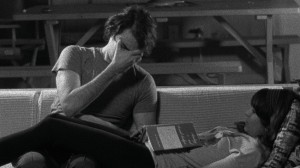 “Have you ever sat in a pool and looked at the ocean?” In writer-producer-director Alex Ross Perry‘s “The Color Wheel,” a single sentence spoken by a compulsively verbal character seems at first affectedly literary, or maybe what would make for a decent Steven Wright line, but in the end turns out to encapsulate the entire movie, lyrically, obliquely, yet just so. It’s sardonic synecdoche. “The Color Wheel” propels twentysomething J. R. (co-writer Carlen Altman) and her younger brother Colin (Perry) onto the road to recover her minimal belongings from an ex-professor-ex-lover. “The Color Wheel” was 2011’s second low-boil sister-brother intrigue, after Aaron Katz’s “Cold Weather,” but these two films have little in common beyond apparent modesty and anecdotal precision. Ross is working in a more needling vein, joining filmmakers like Ronald Bronstein (“Frownland”) and the Safdies (“Daddy Longlegs”), as well as the Duplasses and Lena Dunham, who assemble stories from one little death after another, an emerging cinema of quotidian mortification. (More space would be required to align the film’s rugged 16mm black-and-white with a hulking generational epic like Jean Eustache’s “The Mother and the Whore,” Jerry Lewis, Hong Sang-soo, and the men of Philip Roth’s novels, and it would be space well-used.)

Perry and Altman seem like brother and sister from their shared capacity to be annoying. Altman plays J. R. as a cutesy-annoying “Ein-steeeen,” a woman who would wear a “Who Farted?” t-shirt (with cocked “A”) and no comment is offered (or desired). Perry affects a post-Michael Cera whine to his voice, capturing less a generational intonation than spite that comes out in explosions of seeming acquiescence that is in fact unrelenting verbal violence. His jokes can be funny, but they’re more like dares: I dare you to laugh at this terrible shit tumbling from my mouth, fully formed. The slapstick fuckery of these two disdainful siblings could well be accompanied by gamelan and gong: “Will you fasten my shirt, asshole?”; “Nooo, I look barely legal in a mature kind of way.” Of course, the motley cracks pass muster: they’re brother and sister, it’s the mussed surface of biological likeness. 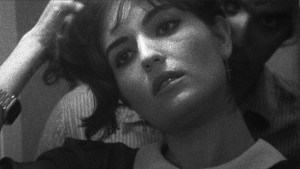 J.R.’s mouthed “Fuck you”s to her brother and her really dumb put-on voices are just latter-year mudslinging and hair pulling. There’s room, too, for trip-and-stumble pratfalls, as well as a wealth of passive-aggressive and outright aggressive barbs: “You’re not qualified to teach, you’re barely qualified to learn”; “You just have such a kooky sense of humor”; “I don’t pinky-swear, you know that, it’s a barbaric practice”; and “I didn’t used to have all this drink spilled on me.”

Bob Byington, director of the grumblecore dispatches “Registered Sex Offender (RSO)” and “Harmony and Me” plays J.R.’s ex, “one of the top broadcast-journalism professors in the state,” a malefic ditherer-manipulator. There’s nimble genius in the scene’s blocking, the character’s listen-to-me-I’m-not-listening played out in a series of mismatched medium long-shot pirouettes where his serial banger-of-coeds professor character backs out of his own persona space on fumes of well-practiced self-justification. (He’s the kind of figure, lunching toward middle age, who’d play out the day in a bathrobe; one of the few book spines immediately visible on his shelves is a fat tome on noted bathrobe model Julian Schnabel.) In Perry’s words, Byington’s performance “straddles a strange place between wish-fulfillment and unchained ego.”

There’s an extended, unbroken take that lasts the length of a reel of 16mm film, which includes a bracingly clumsy reframing by the camera operator, lurching object (and subject) into telling close-up. Thus, the scene shocks formally as well as emotionally, and it earns a welt of wonder, a scar its participants will touch fondly in memory for the rest of their lives. What just happened? Once it’s happened, it’s keenly explicable, serenely inevitable. 83m. New 35mm print. (Ray Pride)

“The Color Wheel” opens Friday at Facets. A trailer is below.