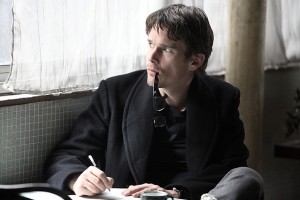 The achingly melancholy “The Woman in the Fifth,” (La femme du 5e) Pawel Pawlikowski’s first feature in too many years—his last completed one, “My Summer of Love,” was released in 2004—follows an American novelist, Tom Ricks (Ethan Hawke) at loose ends in Paris: Tom is that fabled sort of writer who has written but can no longer write, despite the agreeable, well-meant praise of strangers. He comes to Paris with spoken goals, to see a woman, to find his young daughter, that turn out to have deeper implications. Hawke’s severe features strain, his eyes well in worry, and he’s ideal as the observer who may be creating the very world around him, in increasingly ominous particulars. It’s a bold performance. Is he a character escaped from a Dostoevsky novel or a Dostoevsky seminar? Ambiguous, fraught, post-Polish paranoia of the Polanski manner encroaches, even as Tom meets a mysterious woman who could possibly supplant his fixations.  Thriller meets chiller. Cinematographer Ryszard Lenczewski is key to the bursting gloom: as in his often dusky city landscapes in “Margaret” (2005/2011), Paris is a setting of burlap shadows and silken menace. Light falls and sometimes it crushes. And so much is about images of dimming, of diminishing, of flickering, such as one image of a wide tableau of interurban trains passing, and as they leave the frame, along the railway’s walls, fluorescent tubes sputter into nothing. They haven’t the energy to go on. Tom goes on. Eventually, he can even register surprise. Pawlikowski told the Telegraph’s David Gritten, “My stupid ambition is to make a film that’s not like any other–one that has its own kind of logic, and hooks viewers without making them think too much. It’s a film I’d love to see, one in which after 10 minutes the audience isn’t able to predict the whole thing.” Ambition accomplished. Based on a novel by Douglas Kennedy. With Joanna Kulig, Samir Guesmi, Delphine Chuillot. 84m. (Ray Pride)

“The Woman In The Fifth” opens Friday at Landmark Century. A trailer is below.