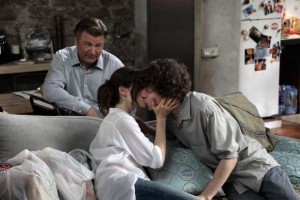 “With age comes wisdom,” a character says in “To Rome With Love.” “With age comes exhaustion,” Woody Allen answers, a touch weary-looking himself. Still, his first appearance at the packed screening where I saw the seventy-six-year-old director’s fortieth feature caused the room to ripple with pleasure: both that he’s still standing and in anticipation of spoken spleen to come. Allen’s said he doesn’t care for the title “To Rome With Love,” which supplanted “Decameron Bop” and “Nero Fiddled,” but my biggest curiosity about creative choices is at what moment he and editor Alisa Lepselter threw temporal unity to the wind and intercut the film’s four discrete episodes. After a first assembly when the film’s pacing was otherwise interminable? Roberto Benigni’s portion, as an ordinary Roman suddenly a national celebrity, incorporates an agreeable amount of full-body humor, largely set on the street. The other all-Italian-language section, about a newlywed couple getting separated, makes little to no sense but its actors are attractive enough even without Penelope Cruz as Allen’s latest call-girl caricature. One oddity-cum-implausibility finds Allen casting against type and turning Diane-Keaton-of-the-moment Greta Gerwig into a retiring whine and allowing the affections of her character’s boyfriend, a wealthy architectural aspirant (Jesse Eisenberg), to be strayed by the arrival of the tiny might of Ellen Page. Still, that sequence provides one lingering medium shot of Alec Baldwin, as an aging architect who likely exists only in Eisenberg’s mind, his cool blue eyes small and still, his large, shaggy head tilted, slightly. That is almost as much a marvel of Darius Khondji’s craft as several of Page’s face, such as a couple when she’s ostensibly drunk in the late afternoon in a cool cavern of an apartment, her head tilted, the light on her round features golden and the curve of her cheeks glimmering moistly. It’s a feat removed from the actual comedy-drama at hand, which mixes the amiably giggly with the tin-eared on a line-to-line-basis. “To Rome With Love” feels unshaped, except for the runamok time scheme: Allen’s gone through a modest number of production company names, but he could easily add “First Draft Productions” to the list with his last several films. 112m. (Ray Pride)