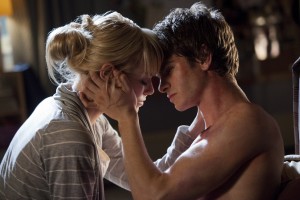 “The Amazing Spider-Man” is a film felt with its fingerprints as much as its heart.

Spidey shooter Marc Webb, whose first feature was “(500) Days Of Summer,” takes advantage of familiarity and moves like the wind setting up the dovetailing of all the characters’ interwoven lives in the newest imagining and it’s all done at speed, with Rube Goldberg vitality if not Sam Raimi velocity.

While there are valid questions—does Peter Parker really have to suffer the endangerment of no less than three father figures?—the screenplay seems to be more glitter than litter in its terse turns of phrase about self-discovery, such as, “Are you having trouble finding yourself?” “Why the sudden interest in the cold-blooded?” (The villain even gets a rooftop speech recalling “Blade Runner”‘s “tears in rain” address, a quirkier and more interesting comparison point than aligning this movie with the three earlier “Spider-Man” entries.)

Andrew Garfield has been a Marvel in movies from “Boy A,” “Never Let Me Go” and “Red Riding: 1974” and he’s no less good here, even if it’s hard to accept him as a high-school outsider like Peter Parker unless he’s full-on high-functioning Asperger’s, this implausibly unavailable good looker, a tall man in his twenties photographed as a Ramones-T-shirt-wearing boy beanpole with a quiff of near-sentient volume. And as his opposite number, Emma Stone, mad blonde, skin impossibly pale in digital capture, wide mouth, ponytail. Boots, skirt at mid-thigh, leggings above the knee, above boots. The whole movie’s an excuse not to get them in bed together, but simply in the same frame: the last shot of her face is like Méliès’ screen-filling moon if its eyes were flooded with pleasure instead of pain.

The physical equipoise of these two captivates, especially in one scene in a high-school corridor where they fumble gamely, bravely, with gravity, as if speaking dance, as if dancing wit, shot largely in full figure. And Stone always with the beautiful, abashed smile: their gravity and charm grounds the familiar archetypes. (Her huge smile is “The Amazing Spider-Man”‘s most remarkable effect.) Watching, I wondered how, outside of Marvel-type origin tales, how emotions could be projected this large, this gleefully, this gainfully, in a modern American movie, and my mind landed on a single grand example. “Spider-Man” illuminates “Moonrise Kingdom” as a latter-day, duo/superhero origin myth. Peter Parker and Gwen Stacy—”She’s the girl in your computer,” his uncle Ben says gleefully—are dizzied alongside each other, in the face of each other, all those features of Garfield and Stone in lollygagging-yet-whirligigging, endearing, adoring opposition. And when he tells her a secret on a city-baring balcony, the compacted yet extravagant range of expressions to accompany her “wh-why-what-wh-ohh!” can only floor you. (And “Ohh!” is the only way Stone’s Gwen knows to say “Oh!”)

And about the tangible, concrete details that hold the characters to Earth between Peter’s explorations of gravity and velocity: The forty films where J. Michael Riva is credited as production designer are largely large-scale productions, including three “Lethal Weapon” movies, “Charlie’s Angels,” “Iron Man,” “The Goonies” and “The Adventures of Buckaroo Banzai,” all of which have undeniable texture. Characterization stipples the frame as glimpses of props speed fleetly past: is Gwen really reading Kurt Vonnegut? And it’s a turquoise paperback cover that matches her simple H&M-style plaid scarf? The dresser in a villain’s spare bedroom has a small Moleskine notebook atop a larger one, a too-neat formation. A useless confrontation has a poster in the background, “This year, thousands of men will die of stubbornness.” There’s a “Rear Window” one-sheet in Peter’s bedroom presaging the perspective his web-flinging, city-slinging will soon provide him. A tumble through a roof into a disused, high-ceilinged boxing gym reveals to Peter an important piece to integrate into his disguise. Physicist-essayist Richard Feynman on Peter’s screensaver. Peter’s father’s beautiful, slim leather valise, with a plaid-fabric lining, with “RP” embossed initials: not as fetishistic as any of Wes Anderson’s furnishings, yet a splendid small daub among so many. Inside the worn leather, there are clues large and small, a pile of things, including his father’s glasses, which he immediately wears, a quarter, a subway token. The red plaid of the battered 1970s-style Better Homes & Gardens cookbook in his aunt’s kitchen echoing the butterscotch plaid of his boxers, glimpsed in a punch-up with a bully. (Even a foregrounded storefront in a soundstage street battle, the “Bartkiewicz Deli,” is homage to a fellow crewmember.)

The contrived events that lead to the film’s climactic zoom through the canyons of lower-to-mid-Manhattan are both architectural and emotional. A life-saving favor earlier in the story leads to an immense favor in turn by an unlikely character: deus ex communitas saves the day, leaving Spider-Man to torque up what for most of us are the aimless levitation of dreams across a digital aggrandizement of an epic urban world.

Gravity returns in the end credits: The film is dedicated to Laura Ziskin, the co-producer of the previous three “Spider-Man” movies, as well as co-writer Alvin Sargent’s wife, who died earlier this year, as did production designer J. Michael Riva in June while working on “Django Unchained.”