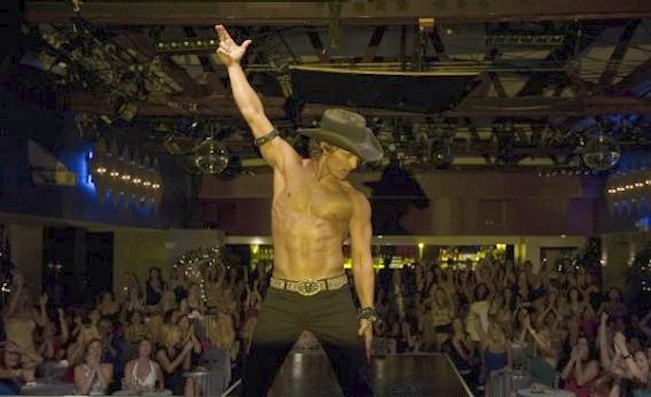 It took under a second to want to love Steven Soderbergh’s “Magic Mike,” and a fragment of a second that’s missing at the very very very very last shot of the movie seals it with a kiss. Opening with the 1970s Warner Bros. studio rollout—a wide screen filled with red with a white-on-black studio logo in its center—and the words, “Let’s fucking get it on tonight,” “Mike” immediately jabs: here, here’s a spirited try at what I can do with the mood of the 1970s Hollywood Renaissance. Lessons in place and pace offered by Altman and Ashby are immediately in evidence; there’s a loving embrace of “Saturday Night Fever”; as well as the passage of time being charted by Kubrick-like intertitles. Made for a reported $5 million, “Magic Mike”‘s copyright is held by “The Estate of Redmond Barry,” Redmond Barry being the birth name of the title character of Stanley Kubrick’s “Barry Lyndon.” (“Bare-it Lyndon”?) (Still, Kubrick never directed a line like “I don’t sport-fuck my brother’s stripper friends.”) Mike (Channing Tatum) is a Florida construction worker by day, a member of the “XQUISITE MALE DANCE REVUE” by night, a protégé to his boss Dallas (Matthew McConaughey) and a dreamer who’s running all kinds of blue-collar businesses on the side while dreaming of being a furniture designer. So far, so clichéd. On the site, he meets a nineteen-year-old fuckup he calls “The Kid” (Alex Pettyfer), whom he quickly introduces to Dallas and the other “xquisite” dudes. Meeting his studious sister, Brooke (Cody Horn), completes the conflicts-to-come. Working from a script by Reid Carolin, business partner of Tatum, whose experiences the story is based on, director-cinematographer-editor Soderbergh lightly works both the classic backstage musical and his own concerns about how money functions in America. And to hark back to Tony Manero, Mike, rebuffed by Brooke, says, “Am I Magic Mike right now, talking to you? I’m not my lifestyle.” Is he just a “bullshit thirty-year-old male stripper” as she says to him?

There are only a couple of sustained close-ups, including one where Mike comes to an important realization and a hero shot of Horn on the back of a boat, her face, eyes, long jaw held in contemplative repose. (Soon enough, she’ll complain she’s “marooned on an island with all the strippers of Tampa.”) Mike and Brooke together are the true choreographic feat of the movie: it’s dance at its most refined, most human. Tampa is pictured as a coastal area with air always the color, night-and-day, of paper-manufacturing effluent. Oh! The stripping? Soderbergh offers a flash of nudity in a three-way scene early on, and an oddly stylized shot of a penis pump in action early on functions like the spinal tap in “The Exorcist” or the zookeeper’s arm that’s ripped off in “Cat People”: let’s get this out of the way and tell a story. The musical numbers slide across the wide screen like so much skin and shadow: they’re as epically haphazard as the real thing. Playing a “Village People”-style range of masculine caricature, from firemen to soldiers (“G. I. J/O,” anyone?)

The most impressive strengths of this very good, very understated movie are Soderbergh’s skill, so very good, at gathering knowing, anticipatory glances between his characters, the splendid dynamic between Tatum and Horn, and the, there’s McConaughey’s Dallas. His training sessions with “The Kid” are bold enough—something about the “free fling of a fuck” as he shows him moves and thrusts in front of a dance mirror—”Who’s got the cock? You do, they don’t.” But it’s the older entrepreneur’s last dance in Tampa that throws sweat, caution and modesty to the wind. I don’t know what power compels Matthew McConaughey, but his stripping setpiece is in a world all its own. With Olivia Munn, Matt Bomer, Riley Keough, Joe Manganiello, Kevin Nash, Adam Rodriguez, Gabriel Iglesias. 110m. Widescreen. Reviewed in 35mm. (Ray Pride)