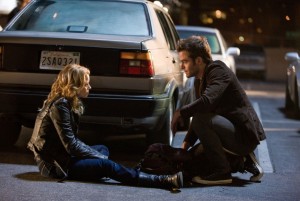 Originally titled “Welcome to People,” the directorial debut of writer Alex Kurtzman is on a substantially smaller scale than the work he and writing partner of twenty years, Bob Orci, are known for: “Alias,” “The Island,” “Transformers,” “Star Trek.” It’s the kind of personally invested, character-driven screenplay that almost no one gets through the studio system these days. Kurtzman told me recently that he knows his success provided him what may be a once-in-a-lifetime opportunity with the $16 million-budgeted “People Like Us.” We meet Sam (Chris Pine), a go-go-go character in the middle of a deal, he sells air, essentially, he sells barter, getting companies to swap something they consider trash to someone else.  When his father suddenly dies, he reluctantly returns to a very specifically detailed Los Angeles, where old family tensions are inflamed and he quickly discovers he has a sister (Elizabeth Banks) his own age whom neither has known about.Kurtzman’s visual style is often as hyper as Sam’s troubled character, and the time the screenplay takes bringing out the truth between Sam and Frankie seems contrived at first, until Pine’s performance brings you over to Sam’s side. (A substantial amount of money is the stake that keeps the plot motoring.) What would you possibly do in a situation like this if you’re a not-especially-grown man like him? (The selfsame event actually happened to Kurtzman, inspiring the film, but he quickly met his never-known sibling in real life.) Another great virtue is Banks as an overworked single mother, who alternates kid, bartending and going to AA. It’s not only a beautifully detailed performance, but also one to which the film’s editing is uncommonly attentive, to sweet result. The story’s pattern is neatly constructed: she wanted a father she didn’t have, he never appreciated his father that he did have. Charm carries the day beyond the screenplay’s myriad contrivances: it’s never too late to speak up so long as you’re still walking the earth. With Michelle Pfeiffer, Michael Hall D’Addario, Philip Baker Hall, Olivia Wilde, Jon Favreau and the ubiquitous Mark Duplass. 113m. (Ray Pride)