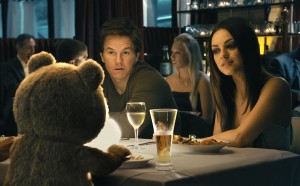 In the exceptionally profane “Ted,” Seth MacFarlane’s first live-action feature, the slurs and putdowns seem more like heightened, nuanced vulgarity than the almost nihilistically cruel air of almost any random passage of “Family Guy.” While happiest in his playlot of 1980s pop-culture references, “Ted” does something exceptionally subversive for a modern big-budget comedy: while vulgar, crude as all-get-out, it’s actually funny, with a neatly structured screenplay and a cornucopia of gags that are enhanced by careful framing and editing. It takes off in the general direction of becoming the “Airplane!” of romcoms, especially in its alternation of high and very low and how writer-producer-director MacFarlane takes the freedom of animation to jump anywhere, anytime and applies it to live action. (Still, the sustained level of gay panic is exceptionally open in its fearfulness and women… okay, heterosexual panic may be the film’s not-so-submerged subtext.) The Christmas he was eight years old, John (Mark Wahlberg) wished his Teddy bear could come to life and be his best friend forever. He gets his wish. Thirty years later… John lives with Ted, as well as his girlfriend of four years, Lori (Mila Kunis). Three’s company! Filth ensues. Lori is forgiving, loving, joins in the two buddies’ relentless joking, doesn’t insist that John have a secret passion, a furniture shop in the basement, a food truck at the curb. John is a guy from Boston who works at a car rental agency and smokes an intense amount of weed. Plus, he’s Mark Wahlberg. Lori works in an advertising office, as clean and spacious and mythical and 1980s as the sentient bear; her boss (Joel McHale) hits on her mercilessly. (He’s as sexist with the other women in the office, accusing them of laughing about “Channing Tatum’s index finger.”) The elemental vituperation of Ted, the grown-up, gone-to-seed walking-talking once-famous Teddy bear is of the same ilk as “persona” ranters on the internet, but of an advanced intelligence put to comic purpose. (Or Mel Gibson as an insult comic.) Ted remains a drinking, drug-abused, sexually randy boy-bear-man, describing “a dirty fuzzy” and other misprisions, including of a grocery checkout clerk, “I fucked her with a parsnip last week and I sold the parsnip to a family with four small children.” The economy and bounce of that line doesn’t earn diagramming, but at least a small salute and a choke of laughter. He’s not shy about his shortcomings, either, saying of one, “You know, I’ve written so many angry letters to Hasbro about that.” (There are throwaways an audience’s laughter will mask, including “I don’t sound that much like Peter Griffin!”) Several cameos ping nicely, and there are larger bits for Sam Jones, star of the ill-fated 1980 “Flash Gordon.” (It’s the least likely Mike Hodges homage I can imagine.) Norah Jones is game as herself and as one of Ted’s former flings; she’s less ethereal for sure than in “Blueberry Nights.” (While Ted says it, Jude Law never comes out in the Wong Kar-Wai film and rues, “I gotta fuck her again.”) A notoriously sarcastic Twitter feed for a smaller distributor deleted the funniest reference I’ve read to “Ted,” which went, approximately, “This Friday, there’ll be a movie co-starring what every little boy in America wants on their lap, plus a Teddy bear.”) MacFarlane frames Kunis either full-figure or in full close-up, and there is the obligatory Mila-in-a-towel-with-wet-hair scene. An extended car chase seems perfunctory, and a creepy subplot with an astutely cast Giovanni Ribisi as a stuffed-bear-chaser isn’t creepy enough, but there is a lonnnnng fistfight scene between Ted and John that demolishes a motel room, as well as most of the preview audience I saw “Ted” with. Co-written by Alec Sulkin and Wellesley Wild. 106m. (Ray Pride)