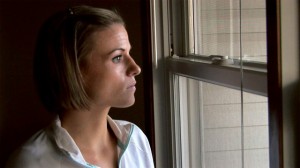 According to government statistics, twenty percent of all women in the U. S. military will be raped. Kirby Dick and Amy Ziering’s shocking, compelling “The Invisible War” is a documentary that makes witness and insists on change. The horrors of the statistics shown on screen—all drawn from government sources—are etched in the faces of the brave women (and men) who served their country and then chose to testify against their rapists in public, largely at the cost of their careers. The impressive cumulative impact is dudgeon, not bludgeon. The imperfect result of “Outrage” and “This Film Is Not Yet Rated” make for terrific muckraking, but “The Invisible War” is more in league with “Twist of Faith,” Dick’s 2005 documentary on the survivors of abuse by pedophile priests, some of whom still worked in the Church. Dick and Ziering contacted over 150 women, then interviewed seventy for several hours each, the filmmakers say, then “chose to travel to wherever their interviewees would be most comfortable; for people whose ability to trust had been all but shattered it was a crucially important decision. The encounters with the victims turned out to be profoundly emotional.” The cumulative impact is devastating, depicting a culture of tolerance of abuse, with a blind eye turned to allegations of violence and rape and an ingrained tendency to blame the victim, always. The unspeakably vile is spoken. Within the intimacy of service, it’s even more appalling than the larger cultural acceptance of prison rape as being inevitable, and according to some observers, even desirable. The military spokespersons on screen acquit themselves badly, hardly aware of the consequences of their actions, but proud of the animated rap videos they’ve commissioned, which, wouldn’t you know, blame the potential victim, even endorsing the hateful notion that rape cannot be prevented. This from a career soldier whose chest is emblazoned with rows upon rows of decorative fruit salad; she was removed from her position during the production of the documentary. One victim says only three choices seem possible: “suicide, AWOL or just deal with it.” A stern gaze at horror, “The Invisible War”‘s end credits note at least a small bit of impact: two days after seeing the film earlier this year, Secretary of Defense Leon Panetta made changes in how allegations of rape are handed upward along the chain of command. 97m. (Ray Pride)

“The Invisible War” opens Friday at the Music Box. The trailer is below.