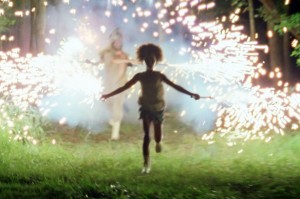 “Beasts of the Southern Wild” takes place in a nowhere much like the outskirts of post-Katrina New Orleans, in an overlooked south Louisiana bayou, in a time much like pre-apocalypse Earth, where animal die-offs accelerate, floods are the norm, glaciers are melting and the seas are ever rising. It’s a world of despair and sustenance, a city on the sea, a place of floating fallen wonders, “Waterworld” writ small, beyond “Mad Max Beyond Thunderdome.” And who is the savior to lead us from the sea to land, to tame the beasts loosed from arctic ice? A six-year-old girl named Hushpuppy (Quvenzhané Wallis) who “lives with her daddy at the edge of the world.” (Her oft-drunk father, Wink, is played with unavailing dignity by nonprofessional Dwight Henry, a New Orleans baker.) She is tiny and she is mighty: “Beasts” can be read as an ecologically minded parable; a shout-out for self-sustaining community or it could be the fevered dreams and lyrical logorrhea of a poetically minded child. Director-co-writer-composer Benh Zeitlin’s 2008 short “Glory at Sea” took the same approach to landscape and village. While “The Bathtub,” as the motley crew calls its zone, is sometimes a nickname for the Bywater and Ninth Ward, “Beasts of the Southern Wild” is specific in detail, nonspecific in place and moment. All this junk and blood comes off the screen as a fierce onslaught on images and music, structured less as drama than theme and repetition. There’s music and fireworks, and then there’s FIREWORKS and MUSIC: it’s a sound-and-image-drunk procession of beauty that startled its first audiences at Sundance this year. The ambush on the senses that is the collected work of Emir Kusturica is a barefaced influence on Zeitlin’s bright and sodden cornucopia, as he enthusiastically admitted in a recent conversation. The production was planned with care, including providing Zeitlin with a full two years of editing, when even low-budget films seldom get more than six months. And who is most influential to the director in terms of editing? Bob Fosse. To which you can only reply when you see the movie: Yes. Some angered reviewers are reading the film as a neoconservative text, even a Tea Party tract. Arguments will be made. 92m. (Ray Pride)

“Beasts of the Southern Wild” opens Friday at Landmark Century. Zeitlin’s short film, “Glory At Sea” (25’48”), which inspired “Beasts,” is below.