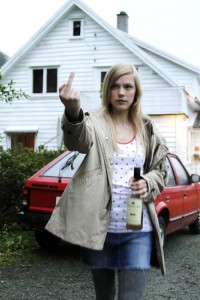 “Turn Me On, Dammit!” (Få meg på, for faen), translated at some film festivals as “Turn Me On, Goddammit!” is frank, raunchy and brisk in its simple story of a Norwegian girl’s discovery of her teenage lust. Nearly 16, Alma (Helene Bergsholm) makes her small town uneasy after a brush with sex and concomitant gossip, but her awkward charm carries the day, and her assurance grows. Documentarian Jannicke Systad Jacobsen’s small, mild first fiction feature (based on a 2005 novel) has the flush of youth and truth, and the clear, soft blue light of the mountain town of Skoddeheimen frames the universal particulars of self-discovery. What’s wrong with Alma? Nothing. She’s normal. “Turn Me On” lacks the epic tenderness of Lukas Moodysson’s teen-girl masterpiece, “Show Me Love” (aka “Fucking Åmål”), but it’s also of a brighter cast than the punishing sex in Lena Dunham’s work. With Malin Bjørhovde, Matias Myren, Henriette Steenstrup, Lars Nordtveit Listau. 76m. (Ray Pride)

“Turn Me On, Dammit!” opens Friday at Siskel. A trailer is below.