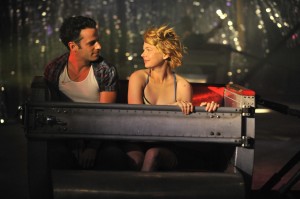 “Take This Waltz” is a daringly ambivalent, emotionally rich drama about the shoals of a stagnant marriage, the crashing waves of new attraction. It’s also writer-director Sarah Polley’s love letter to a bedraggled Michelle Williams, who plays Margot, a drowsy young woman whose life hasn’t come into focus for herself. She’s been married five years to Lou (Seth Rogen), a cookbook writer forever testing chicken recipes, filling the house with scent if not savor. While on a distant writing assignment, she meets another man, Daniel (Luke Kirby), whom she thinks she won’t see again, then sees him on the plane, shares a cab, then finds out he lives directly across the street. Hiding his art, driving a pedicab, he keeps his distance: the middle distance. The tease of the improbable and the undesirable and the so undesirable plays out. As a screenwriter, Polley is as pointillist as a short-story writer and as bold as a signboard painter: big and little gestures mix in winning measure. (“Five-point-oh quakes in the Provinces,” the television news reports.) Everything’s ripe and boldly colored. Luc Montpellier’s cinematography is as lucid (and lucent) as Polley’s generosity to her characters. And to costume designer Lea Carlson, who provides Margot with a succession of audacious yet telling summer garb, from one particular white-pinspot-on-red sundress to a range of warmly colored tees, skirts, short-shorts and espadrilles and sandals. “I’m afraid of connections… in airports. I don’t like being in between things… I’m afraid of being afraid,” Margot confesses at one point. Her clothes always assert: I’ve arrived; I’m here, aren’t I? It’s all tragi-romantic: “Take This Waltz” feels like the film equivalent of a Nouvelle Vague cover of a familiar tune, seductive in wholly fresh fashion. 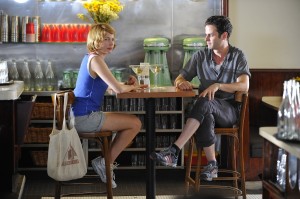 “What’s the matter with you, generally?” is a sample of Polley’s keenly observed, often passive-aggressive dialogue. “You seem restless, in a kind of permanent way.” (But there is one extended scene between Margot and Daniel that goes much farther than the entreaty, “I want to know what you’d do to me.”)  Other exchanges bristle with the abrupt hostility that lies beneath a particular kind of otherwise agreeable Canadian personality. Polley’s a Canadian through-and-through, down to taking her title from a Leonard Cohen song and then brandishing it in a fashion both rueful and anthemic: the “waltz” we see is laced with explicit sexual bravado and numbing repetition. The colors of clothing and interiors alike tend to Demy and the light to humid summer Toronto, with bits of that city’s Parkdale neighborhood and College Street stretch of life and nightlife lightly featured. Cafes, kitchens, apartments, a Pages book tote, a copy of local lit mag Brick: this is a Toronto-set movie that lets Toronto be Toronto. (With crates and crates of Steam Whistle beer in green longnecks.) It makes you want to wander there on a sweet summer night: here’s a barefoot sort of summer. (Margot and Lou nap off the swelter; the lilt of fan hum sounds almost like a 16mm projector. Outdoors: a cricket chorale.) Williams is superb throughout, allowing the camera to observe Margot’s mixed motives—tender, abashed, fearful, as when a litany of sexual provocation is met with little-girl glee abut also astonished, astonishing laughter. Polley soaks her movie in music, even elevating the bumf of the Buggles’ “Video Killed the Radio Star” to something near-transcendent, not once but twice: she winningly uses junk pop to break the heart. Again and again, the song sounds new. With Sarah Silverman, Diane D’Aquila. 116m. (Ray Pride)

“Take This Waltz” opens Friday at Landmark Century. A trailer is below.