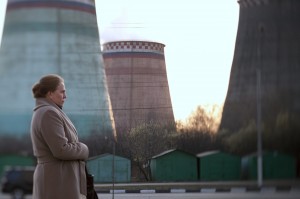 Andrei Zvyagintsev’s elegant, masterful “Elena” balances a dynamic of lacquer and paint-thinner, and creates a resoundingly pessimistic parable of any possible future for the Russian Federation. It’s also a variation on themes of class, resentment, aspiration and murder, a chilly noir told in high style that resembles the late Claude Chabrol’s satiric variations on Hitchcock. Elena is a middle-aged woman who at first appears to be the caretaker of a wealthy, elderly man, his Leonard Cohen-style skull as shorn as his jaw, with the close skin of a prophet or plutocrat. He’s a retired Moscow businessman; she’s his second wife. She needs money for the family that came before him, and those pressures slowly seep in. He has a “prodigal daughter” who vies for his attentions (and his money). Every element of the frame and soundtrack is firmly controlled. The camera prowls the flat, a survey of a well-off apartment that could have been transported directly from a showroom, minor Asian touches atop commonplace Restoration Hardware.  Its ambiance is muffled as we learn its gleaming appliances and devices while outside; there are parts for car alarm, heavy trucks and then the zot-zot of morning alarm. Heavy bedroom doors rumble like a rock being rolled over or away from a tomb. Outside, in leafless branches, crows assemble as throaty murder. Later, this is contrasted with the prole flat, where a hulking humming yellowed antiquity of a refrigerator is no match for the flat’s petite silver machine that seems more suited for champagne than sausage. Zvyagintsev, whose earlier films include “The Return” (2003), shows a land with harshly bifurcated levels of opportunity. When shots move from simple display to hard diagonal geometry, bad things are about to happen: the turn of a shoulder, a glance in an expected direction, as in a swimming-pool sequence, inevitably presages sudden change.  Uneasiness also comes on the rhapsodic pulse and swoon of Philip Glass that rises from the sound design as inexorably as the clack of train on track. We learn she’s not a servant, but the second wife: Zvyagintsev withholds. Her son’s a ne’er-do-well and unless she can find the money, her ill-educated grandson won’t have a place in college and will wind up in the army, “straight to Ossetia.” Their distant housing project, amid tall dry drab weeds, stands before a trio of tall, steam-discharging cooling towers. Pictorially, the fate of anyone there seems determined. As in the plush apartment, décor is destiny. The contrasts lack the jumbled grace of “A Separation,” but Zvyagintsev’s intentions are more illustrative than morally ambiguous. (When we finally meet the daughter, with deep-set hazel eyes, vital and contrary, she’s a breath of nicotine, from a spent generation that spent the sudden riches of post-USSR Russia.)  Still, the ending, when crows assemble once more and low has overrun high, the meaning of the symbolic societal fall could either be condemning the lower classes or bruiting what it takes to persist under the Putin regime. A lustrous apocalypse, “Elena” shows Russia as a nation-state past decline. How it adds up in the end is a matter of personal politics, and personal taste—arch-conservative or merely purged of hope?—but it is also as icy as a glacier. With Andrei Smirnov, Nadezhda Markina, Yelena Lyadova, Alexey Rozin, Evgenia Konushkina. 109m. (Ray Pride)

“Elena” is playing at the Music Box and opens at the Wilmette on July 20.