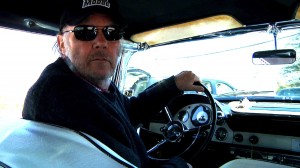 The sound is the superlative contemporary component of “Neil Young Journeys,” Jonathan Demme’s latest venture with his old friend. But the heart is in two old friends informing each others’ work:  Alternating Young’s drive from his hometown of Omemee, Ontario with a May, 2011 concert in Toronto’s Massey Hall, the sixty-eight-year-old director and the diehard sixty-six-year-old musician create an understated portrait of trust. In his 1956 Crown Victoria, Young motors his way from past to present, telling Demme’s prosumer camera stories that he half-remembers and re-embroiders about the places they pass. (Young’s wry on ham.) Onstage, Declan Quinn’s camera stays close on performance, to the point of a couple of extended shots taken with a miniature lens on the neck of his guitar. While it would seem that the pair might have exhausted their possibilities in two earlier documentaries, “Neil Young: Heart of Gold” and “Neil Young Trunk Show,” the understated professionalism and lack of nostalgia is heartening here. And a couple of the performances are powerhouse, especially “Ohio,” about the four students killed at Kent State in 1970. (Also fine are the renditions of “My, My, Hey, Hey” and two unreleased songs, “You Never Call” and “Leia.”) 96m. (Ray Pride)

“Neil Young Journeys” is now playing at the Music Box.