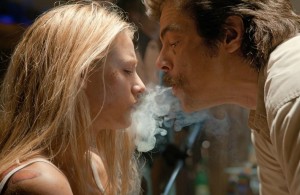 “Your love story is all fucked up, baby” is one of the richer lines of dialogue, even if not in self-critique, from Oliver Stone’s sleekly pulpy “Savages.” It’s six characters in search of a consistent tone in this violent adaptation of Don Winslow’s novel of Laguna drug running, alternating between dreaminess and splatter, idealism and pragmatism, political-historical allusions and inspired hambone acting. While pre-release images suggested a “Natural Born Killers”-shot-in-Instagram was in store, the shape of the film, up to a two-possible-endings ending, is lush in its colors but restrained in its cutting, even in its most brutal depictions of Mexican drug cartel violence (which are also restrained in comparison to the real thing). Two idealistic-ish drug dealers (played by Taylor Kitsch and Aaron Taylor-Johnson) share their business—culturing high-end marijuana—and the same woman, Ophelia, or “O” (Blake Lively), whose voiceover, not to put too fine a point on it, is often dopey: ” “I have orgasms; he has wargasms.” Kitsch is the ex-Navy SEAL who brings the testosterone; Taylor-Johnson brings a Tao of entrepreneurship and giving back. A cartel wants a cut of their business; they say no; violence continues. (Not-so-subtle parallels between Baghdad and Baja are drawn.) Three “grown-ups” light up the film with their impassioned, destructive behavior: Salma Hayek as the head of the cartel, Benicio Del Toro as one of her enforcers and John Travolta as a warped-and-woofed DEA agent, overweight, balding, in the pay of everyone. (He stands tall as a fine ruin.) These actors embrace degeneracy in a way O’s would-be playful voiceover cannot. There’s a scene in a kitchen between Del Toro, Travolta and tomato slices on a sandwich that is a modest epic of hambone acting. This is the lurid glee that keeps the film fueled, not its other mixed message. Marlon Brando would murmur approval, as he might of Stone’s nearly Tarantino-class brandishing of Hayek’s bare feet. Cinematographer Dan Mindel’s credits include Tony Scott’s “Domino,” which is more of an imagistic whirlwind. With Emile Hirsch, Demián Bichir, Shea Whigham. 131m. (Ray Pride)