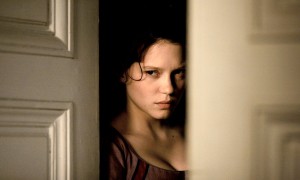 (Les adieux à la reine) Writer-director Benoît Jacquot adapts Chantal Thomas’ 2002 novel for a compelling period piece that recounts the first days of the French revolution, as experienced by the court ensconced in the palace at Versailles. With co-writer Gilles Taurand, Jacquot fashions what he calls a study of “panic” in the royal retinue. Rumors of insurrection travel by horsemen in this pre-Twitter era. Composer Bruno Coulais (“Coraline,” “The Secret of Kells”) communicates the discord of Paris that echoed in nervous whispers and looks. The unimaginable looms for the one-percent of 1789. A theme of textuality centers on twenty year-old Sidonie Laborde (Léa Seydoux), a low-born favorite of Marie Antoinette (Diane Kruger). Her duty is reading literature to divert her majesty in her private chambers. The queen confides in Sidonie that she is in love with a duchess whose head is among the 286 listed in an anti-monarchist pamphlet that reaches Versailles, and commands her devoted reader to risk her neck by dressing up as the duchess, who she resembles, and heading for the Swiss border in a coach with that duchess dressed down as a chambermaid. The queen has no idea her reader secretly embroidered a dahlia credited to the court embroiderer. Sidonie’s other secret is something like a class-inappropriate crush on the queen. Surrogacy is the subtext in “Farewell, My Queen.” Exploring the female psyche is the focus of Jacquot’s earlier “The Untouchable,” “Right Now,” “A Single Girl,” and “Sade,” set in a sylvan asylum for French royals during the Terror in 1794. Jacquot, who made a two-part documentary on French psychoanalyst Jacques Lacan for French TV in 1974, recently told an interviewer: “I love women. So I try to make films about what I don’t know because I’m a man.” With Virginie Ledoyen, Xavier Beauvois, Noémie Lvovsky, Michel Robin, Lolita Chammah, Vladimir Consigny. 100m. (Bill Stamets)