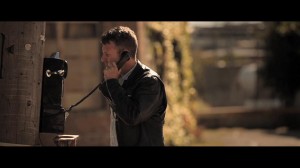 Chicago and the green remove of Wisconsin’s Sauk County co-star in John Mossman’s “Into the Wake,” a slow-burn psychological thriller with an insistent score but a knack for place, omen and pictorial moodiness. Mossman’s sense of space is notable for a director better known as a theatrical director: he’s got a fine eye. (Maybe except for the character bearing a Post-it with a “555” number.) Tim Miller (also co-writer-co-producer) plays a Chicago man who is drawn by a single phone call into the unfinished business of a murder he witnessed as a child: kidnapping, captivity in the woods, long-roiling blood feuds and lush Wisconsin landscapes follow. With Kristin Anderson, John Gray. 76m. HDCAM. (Ray Pride)

“Into the Wake” plays Saturday, Monday and Wednesday at Siskel. Mossman and Miller will appear.

Into the Wake Trailer from john mossman on Vimeo.