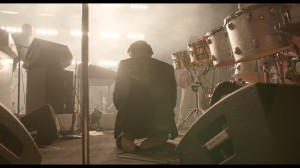 James Murphy is not a rock star. He does not snort cocaine in bathroom stalls, have an entourage hanging on his every word, consort with an ever-changing groupie harem or mutilate live animals on stage. If he does, we certainly don’t see it in “Shut Up and Play the Hits.” What we do see is LCD Soundsystem’s forty-year-old leader shaving, brewing coffee, walking his dog, breaking down in a basement and—intercut between all these daily activities—playing one of the most legendary farewell concerts since The Band took their “Last Waltz” in 1976.

“Shut Up” only features selections from the band’s four-hour Madison Square Garden goodbye, veering from documentary to concert film, painting a picture more than telling a story. The film is possibly one of the most beautiful rock movies ever made, with stunning cinematography that deserves to be praised as highly as the music it’s intended to capture. The story it documents, however, is never fully unraveled: even Chuck Klosterman, whose interview with Murphy forms the backbone of the film, has a hard time extracting exactly why Murphy decided to break up the group. Murphy says he’s getting old, wants to have kids and lead an ordinary life. Then again, “Is that a good enough reason to quit?” By the end of the interview, Murphy’s not so sure; by the end of the movie, finding the answer doesn’t much matter. Despite the lofty aspirations of directors Will Lovelace and Dylan Southern, “Shut Up” is a celebration, not an existential exploration.

A celebration has to have people, of course, and the decision to release the movie for “one day only” forced the kind of crowd that a great concert demands. “Shut Up” is not a movie to be seen alone on a laptop: LCD Soundsystem was only together for ten years, but by the time Murphy announced the band’s imminent retirement in 2010, they had recorded some of the most danceable music of the decade. Fittingly, “Shut Up” is a movie that inspires foot tapping and hand clapping, if not full-out dancing in the aisles. At the Music Box Theatre, two sold-out evening shows led to the addition of a final midnight screening, with hundreds of people showing up early and lining the block to get inside. The 550-person audience applauded every song, and as the band began “Dance Yrself Clean” on-screen, a group of friends decided “we should fucking dance,” though they never left their seats. A couple in the front row couldn’t help themselves later on when Murphy broke into “Movement,” an early guitar-heavy single that, like most of the band’s catalog, is difficult to pin down with genre terms like “rock ‘n’ roll” or “dance music.”

It might, in fact, be most appropriate to characterize LCD Soundsystem as a “punk band,” though there’s not too much hardcore in them and not too much “band” involved in their records. Most of their albums are recorded with Murphy covering all the instrumentation, and “LCD Soundsystem” proper began not as a band, as Murphy makes clear in the film, but as a song, “Losing My Edge.” Murphy laments losing his musical coolness to the kids “coming up from behind,” drums and keys lay down a dance beat, and the song explodes into a namecheck of Can, Suicide, Joy Division, Gil Scott-Heron and dozens of musical influences. “Have you seen my records?” he asks near its end, and we haven’t. Over the past ten years, however, we’ve come pretty close, hearing what seems like everything Murphy’s ever heard reconstituted into tracks that, diverse as they are, are instantly recognizable as his own. The guy does what he wants and plays what he wants, and while he may not have the look of Johnny Rotten or Joe Strummer, Murphy certainly has the ethos.

Music Box Theatre has added additional screenings of “Shut Up and Play the Hits” on July 23 and August 2.