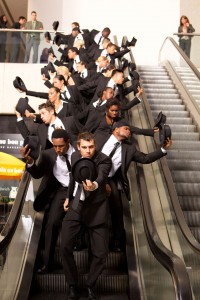 The fourth “Step Up” film moves to Miami from the New York City setting of “Step Up 3D” (2010) and the Baltimore of “Step Up 2 The Streets” (2008) and “Step Up” (2006). This change of clime means the body count of hot near-naked youth climbs. Once again a street dance crew pursues its art despite officialdom and in-house envy. And a good-looking duo will fall in love after reconciling differences in class and choreography. Sean (Ryan Guzman, a model and MMA fighter) is a waiter at a luxury hotel and the ringleader of a flash mob of unemployed dancers. Ten million hits on YouTube will win “The Mob” a hundred grand. Emily (Kathryn McCormick) is the daughter of the CEO of Anderson Global Properties. She is in Miami for the summer to audition for an artsy dance company. Her dad has designs on the lower-income, multicultural neighborhood where Sean lives. What develops is all-too-foreseeable in this unreflexive retread of tropes from the traditional backstage musical. Yet, for their first features, director Scott Speer and writer Amanda Brody deliver plenty of pumped-up dance scenes choreographed by “Step Up” vet Jamal Sims. We are not supposed to ask who paid for all the props and outfits mustered by The Mob for its impromptu numbers and Internet uploads. “‘Step Up Revolution’ is a love story set among the haves and have-nots of Miami,” hypes co-producer Jennifer Gibgot. The political dialogue is idiotic. Sean proclaims: “We’re invisible in this city. We exist.” Emily tells him: “There are rules.” “Break the rules,” he counters. “Instead of just getting hits, we can make a statement,” he later figures out. Emily gets it: “Enough for performance art, it’s time for protest art.” OK, kids, let’s Occupy Miami! And one and two and we own Ocean Avenue. With Misha Gabriel, Stephen “tWitch” Boss, Peter Gallagher, Tommy Dewey, Cleopatra Coleman, Mia Michaels, Megan Boone, and a walk-on by  franchise fave Adam “Moose” Sevani. 97m. (Bill Stamets)

“Step Up: Revolution” is now playing.