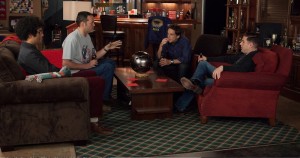 “The Watch,” known as “Neighborhood Watch” until the Trayvon Martin killing, does have a quartet of macho no-goodniks traipsing the parking lots and cul-de-sacs of “Glenview, Ohio,” late at night but their adversaries are less “the other”—in this case, aliens set to skin them and take their way of life—than themselves. “The Watch”‘s single historic milestone is setting a world land-speed record in movies for the repetition of the word “cum.” You probably wouldn’t hear that word as many times in a weekend’s worth of old-timey Marriott Hotel porn. Coming from Akiva Schaffer, director of the “Saturday Night Live” shorts, “Dick in a Box” and “Jizz In My Pants,” this semen-obsessed man-comedy is definitely a higher-budgeted step sideways.  But you know the movie’s not going very far when Ben Stiller’s lonely suburban schmo, a Costco manager with no friends (but many clubs) who’s also keeping a secret from his wife is presented as full-on caricature, or Ben Stiller in giddiest paycheck mode. “My tears have turned to fists! No more murder because there are rules!” he tells an unimpressed high-school football crowd after his night watchman is killed while drunk and stoned. (He also later insists to the quartet of delusional drunks he’s assembled that they’re not a “vigilante squad.”) Lists are checked, notes are struck, and meanwhile, Vince Vaughn emerges from his man cave to motormouth through intermittently splendid obscenity and failed cop-recruit Jonah Hill, notable for newly chiseled cheekbones and an embrace of any possible variation on penetrative gay sex. (The character goes a full furry furlong beyond “bi-curious.”) Richard Ayoade brings a different flavor of profanity to the mix, and his cheery deadpan is the film’s most consistently satisfying attribute. (The British use of a certain four-letter c-word lolls off his tongue.) Non-sequiturs brandished by Vaughn come directly behind: “It’s like the Chinese word for shut the fuck up and dance!”; “It’s as simple as putting your dick in a vagina” and “C’mon boys, let’s plug these motherfucking holes.” The on-screen writing credit goes to Seth Rogen and partner Evan Goldberg, from a story by Jared Stern; “Tropic Thunder”‘s Justin Theroux’s name still appears on some publicity and posters. In a conversation about cinematography at an orgy, Schaffer appears as “Casual Wanker #3,” in the company of “Casual Wanker #1” Andy Samberg and “Casual Wanker #2” Jorma Taccone (“Hot Rod”). With Will Forte as a cop who’s almost the match of his mustache, an epicene Billy Crudup, Rosemarie DeWitt, Doug Jones, R. Lee Ermey (“Why don’t you shut your cocksucker, dickweed?!”), and with its central Costco location, a surprising surfeit of prominent brand placements amid the swears and dares, including the omnipresence of Tide. 102m. (Ray Pride)

“The Watch” is now playing.