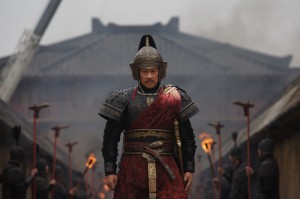 Chen Kaige’s “Sacrifice” (Zhao shi gu er, 2010), a fifth-century action film-cum-fable based on a thirteenth-century opera, plays out in the fashion of historical pageantry we’ve come to expect from China’s established filmmakers (once known as the “Fifth Generation”), with much of the narrative drive coming from an audience’s familiarity with classic novels, theater or opera. This father-and-son switched-at-birth dynasty-of-contrivances melodrama will mean so much less to Western audiences. Connected families in modern China are able to work around the one-per-family-preferably-boy-child restrictions, and there’s a single element I recognize that may have made the movie resonate at home. But my weary reaction was likely much the same as a Chinese audience trying to decipher a movie like “Ride With The Devil” or “Gangs of New York”: What is this “Civil War” you speak of, sir? As aphorist Karl Kraus observed in the 1910s, “Satires which the censor can understand are justly forbidden”: historical epics like “Sacrifice” justly take a while to find U. S. distribution. The expected quantity of goring, gashing, grackles grackling and vegetation in meaningful motion is in evidence. Still, the storytelling is repetitive, elongated and exasperating. Kaige is far, far from the days of “Farewell My Concubine.” The crowd scenes have teeming volume, especially with battles where horses are catapulted across the screen. With Ge You, Wang Xueqi, Huang Xiaoming, Fan Bingbing. 130m. (Ray Pride)

“Sacrifice” is now playing at the Music Box.