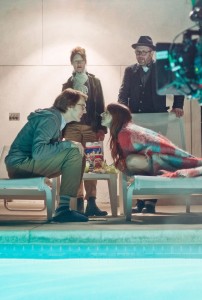 A weave of fancies, “Ruby Sparks” is a tart high-concept variation on modern romantic comedies, “Pygmalion” rewritten to poke holes in the modern-day-movie “manic pixie dream girl” myth. Plus, it’s directed by Jonathan Dayton and Valerie Faris, a couple, starring another couple, Paul Dano and Zoe Kazan (who also wrote the screenplay). Calvin Weir-Fields, whose name sounds a little like “Jonathan Safran Foer,” wrote a first novel at nineteen, a precocious success, a Salingeresque doorstopper called “Heartbroken Old Times.” Now he’s banked a lot from ten years of royalties, living in a clean-lined duplex home more a screenwriter’s aerie than a writer’s nook. (Its angles skew nicely to the Escheresque.) His desk is all too neat, yellow Post-its, kitchen timers, manual typewriter just so. He’s had write’s block for years: the page is as blindingly white as his home. But one day, an exercise offered up by his Elliott Gould-calm therapist (Elliott Gould) leads to him writing about an idealized woman, a girlfriend he’d hope to have, “just a normal girl, just a girl I made up.” Then, from nowhere, there she is, Ruby Sparks, calling his name from downstairs, barelegged in a blue chambray boyfriend-shirt and black-white-striped panties, barelegged and barefoot, clabbering eggs with hot sauce. The script takes a fine note from “Groundhog Day” and never attempts to explain the implausible, impossible mechanics of Ruby’s manifestation. “You’re a writer, not Ricky fucking Jay,” his brother Harry (Chris Messina) splutters, but is awestruck when he witnesses the truth: “It’s like the movie ‘Harvey,’ but she’s not an imaginary rabbit!” “She’s some motherfucking product of my imagination,” Calvin exclaims fearfully. Harry says he doesn’t even understand his wife, “sometimes she’s as mean as fuck for no reason.” He cautions Calvin, “Women are different up close… You haven’t written a person, you’ve written a girl.”  (For their second feature, Dayton and Faris again mint properly denominated swears.) The storytelling is brisk, alternating charm and fear—could the story turn into “Frankenstein” or “The Shining”?—and it’s a lovely portrait of Los Angeles’ Los Feliz area as well, shot digitally by Matthew Libatique (“Requiem for a Dream,” “Iron Man,” “Black Swan,” “Josie and the Pussycats”). Literary and cultural references and japes abound. An example of the film’s sedate but telling comic details is having Calvin’s dog, Scott—named for F. Scott Fitzgerald—eating “Catcher in the Rye” when left alone too long, leaving the colorful, familiar-to-some cover confettied over a duvet. All told, I’m pleased even just to hear Kazan say the words, “Maybe we knew each other in another life. Or maybe we just go to the same coffee shop.” The rich, diverse score by Nick Urata, from DeVotchKa, who contributed mightily to the “Little Miss Sunshine” soundtrack, hits unexpected emotional notes.  With Antonio Banderas, Annette Bening, Alia Shawkat, Aasif Mandvi. 104m. (Ray Pride)