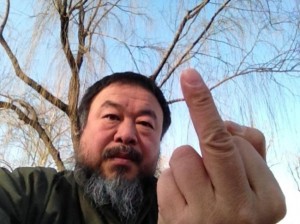 Arriving for an interview for “Ai Weiwei: Never Sorry,” Alison Klayman’s documentary about the Chinese artist and activist, I had to cool my heels in a corridor for a few minutes and checked my cell phone. Several new Tweets available, I see, and in the general stream, several are in Chinese: Ai Weiwei, commenting from his studio, where he’s largely lingered since charges of tax evasion were leveled against him. When I’m ushered in, Klayman immediately checks her iPhone to see Ai’s topic of the moment. And just before typing this, I checked Twitter again: @aiww in the house, commenting on the London Olympics and cracking jokes in retweets. In her documentary, the young filmmaker has the vantage of moment, having her camera in hand at the most opportune time to catch both the almost unfathomable courage and the everyday curiosity of China’s best-known artist in the rest of the world. His dissidence seems a part of everything he does: he sees the world a certain way. Two years into the shooting of “Never Sorry,” a few months into its editing, Ai was disappeared for eighty-one days. His blog, documentaries he made about children killed in badly built schools in a 2008 earthquake, his middle-finger photographs that include his barrel-fingered fuck-you raised toward Tiananmen Square: all in his column. Plus accusations of tax evasion, which persist to this day, including hearings last week from which he and his lawyers were barred. “Never Sorry” feels as present-tense as any recent documentary, and glimpses of a young Ai living in and photographing events on New York’s Lower East Side for ten years starting in the 1980s, shooting 10,000 photographs and becoming friends with Allen Ginsberg, demonstrates yet another fracture in his multitudinous personality. “I think China cannot afford not to change,” Ai has said. “It takes time, but only when there’s pressure, when there’s a demand for it. We all know humans are not going to change by themselves if there’s no pressure there.” The art and the artist in “Never Sorry” both impress: Ai’s hope impresses even more. 91m. (Ray Pride)