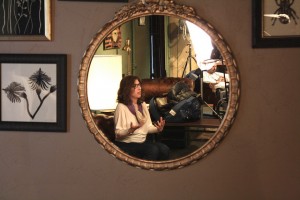 In the life of one billionaire family, how rich is rich? Very rich until the 2008 collapse of much of the world economic order and the stoppage of building their personal castle near Orlando—”the children have their own wing”—meant to be the largest ever constructed in America, patterned after the original Versailles in France. Filmmaker-photographer Lauren Greenfield (“THIN,” “kids + money”) was on the ground at precisely the right moment in her three years of production to capture the ego and extravagance of an American Dream turned into a catastrophic monstrosity in “The Queen of Versailles,” which is both rollicking and galling. Jackie and David Siegel are larger-than-television characters, likeable in their errant delusions, bearing only a gilt complex: how can we make things shinier? As David’s fortune came from parlaying investments in the Westgate Resorts timeshare properties, the desire for a hulking castle and its permanence is only the first of many satisfying ironies on screen. (He was also a major contributor to Republican causes and the Miss America organization.) “With intimate access, and an empathetic perspective that was the result of long periods of time spent with the family, ‘The Queen of Versailles’ combines environmental portraiture in a series of interviews, with cinema-vérité ‘decisive moments,'” writes Greenfield, and it’s a fair summary of the eye-widening, slightly disdainful entertainment she’s confected. Shakespearean tragedy? More all-American morality tale and all-purpose metaphor for the .01% against the world. The ending is modestly terrifying. Winner of Sundance 2012’s “U.S. Directing Award: Documentary.” 100m. (Ray Pride)