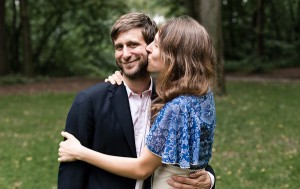 “Richard’s Wedding,” from writer-director-editor-star Onur Tukel is a talkative, banter-giddy comedy of manners that suggests all kinds of movies that have yet to be made on low budgets with ever-more sophisticated low-budget equipment. Vain, negative, tactless, yet funny thirty-nine-year-old Tuna (Tukel, “Septien”) and his best friend Alex (Jennifer Prediger, “Uncle Kent”) walk across New York to the wedding of their friend Richard, gathering friends along the way under encroaching storm clouds in Central Park. Really politically incorrect conversation and conflict ensue in what resembles real time. Does this movie have a genre, a slot, a niche? A 2007 piece by Amy Taubin, “The New Talkies: Generation diy,” talked about the effort to eliminate “mumblecore” from the vocabulary in talking about conversational comedies. With “Richard’s Wedding,” profane, teasing repartee is the nonstop coin of the realm and it would be hard to label its behavioral mayhem. Comparisons have been made to Neil LaBute, but Tukel’s less acrid, as well as to “Who’s Afraid of Virginia Woolf,” a blast furnace unto its own. Still, it’s the most enjoyable uncomfortable comedy I’ve seen in at least a few weeks (stand up, “The Color Wheel”). “I’ll kill your fucking cat! I’ll smash its fucking head in!” is a typical outburst, set in a wealthy acquaintance’s Greenwich Village apartment, and in context, what do you know? It’s funny. (“I can’t believe I’m friends with you,” Alex says. “Why?” “Because you’re kind of an asshole.” “You are what you eat,” Tuna responds, compulsively; Alex ignores that, equally practiced. “How do you live with yourself?”) Almost fully scripted, “Richard’s Wedding” captures a certain here-comes-midlife-crisis-soon-enough haplessness with zealous verve. If I knew this film personally, I would get it drunk and point at it and laugh and bro-hugs would likely end the evening. 88m. HDCAM. (Ray Pride)

“Richard’s Wedding” opens Friday at Facets. A trailer is below.