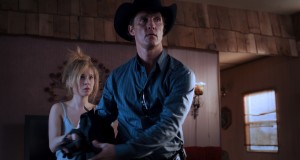 My strongest memories of Chicago storefront theater in the 1990s when Tracy Letts’ “Killer Joe” was first loosed are rude floorboards and multiplicities of dust. Letts recalls the confines of the space at Evanston’s Noyes Cultural Arts Center. “There’s still a theater there called Next Theatre, but down the hall, in the same building was something called the Next Lab, the creation of Dexter Bullard. It was a classroom that had been painted black. There were about forty seats, about as many as can fit into a classroom, ringing two sides of the stage. We built the trailer inside that classroom, with two walls cutaway. So I mean, it was very close. People were as far away as you and I are now, to the action going on, on stage. It was a very intense experience.”

The film of “Killer Joe” is William Friedkin’s second batshit-crazy collaboration with Letts, after “Bug,” (2006), which offered Chicago-bred actor Michael Shannon—who happened to be in the first production of “Killer Joe”—his first chance to, well, truly bug out on screen. In this round, Friedkin, working with cinematographer Caleb Deschanel (“The Right Stuff,” “The Passion of the Christ”) for the first time, and with Arri’s digital camera, the Alexa, doesn’t so much as open out as open in “Killer Joe” and its cast of murderous downcast (but upbeat) connivers. Colors that pop, the use of space in expressionistic ways, heighten scenes both on sets and the not-so-great outdoors of Texas in a way bolder than 35mm film. Friedkin’s career began in Chicago in the 1960s in television documentary, and throughout this seventy-six-year-old director’s career, one throughline has been reinvention, partially through embracing the latest in film technology. “Killer Joe” is a true digital film. “I know, it’s fascinating,” Letts says. “He knows what he wants and he’s so experienced at it now that [watching him at work] you do get images of Samuel Fuller or someone like that, a guy who really knows his way around a camera, where he’s going to put it, how he’s gonna maximize emotional impact with every shot he takes. One take, two at the most. And I mean, something’s got to seriously go wrong for him to give them a second take. He’s already come out and said, ‘I think 35mm is overrated. I always thought it was overrated.’ I’ve seen this in Billy, if Billy doesn’t know something, he’ll learn it, and he’ll learn everything about it. He’s really tireless. There won’t be someone better informed on a subject than Billy that he’s engaged in.” In his career, there have been so many renewals of technology, so many economic shifts, this man has remained curious through so many transformative events. “It seems to me a lot of those guys from his generation, they either learned to play the game and work within that system, or they didn’t. If they didn’t, chances are, they went away. I can’t tell you what happened to Jerry Schatzberg; I know Monte Hellman just came out with a movie recently, but a lot of those guys couldn’t work within the system. So they went away. Billy is that rare bird who has managed to not work within the system, sometimes work in the system, go away, come back, and like you say, [make films that are] batshit-crazy, it’s hard to put an arc on him. The reason that Bill doesn’t make more movies isn’t that he can’t get hired, he genuinely doesn’t like the scripts he sees.”

There are several moments in the film, mostly involving Matthew McConaughey’s bad cop/killer, that go past the common pale. “The business with the ratings board was interesting,” Letts tells me. “We got the NC-17. Billy had always been afraid, and I naively thought, no way we’d ever get that, just by more objective yardsticks of movies like ‘Girl with a Dragon Tattoo.'” The board seems to object to general temperament, a successfully sustained mood. “I didn’t see it coming. It happened. Then there was an appeal. I went to the appellate board with one of the producers and we lost 13-0. Then Billy took a shot at editing the movie. I don’t know how much he cut. They don’t tell you what to cut. We lost 13-0. And then Billy put the seconds back in. I can’t do it. What they are objecting to, you are absolutely right, they are objecting to overall morality. They are objecting to something very general about the movie that there is no way to cut.”

To be reductionist, this is a cruel black comedy about how poverty fucks you up on every level. But that’s a good thing, right? To the ratings board, the characters are too rambunctious? “When I said to the ratings board, when I brought up the examples of ‘Saw’ and ‘Hostel,’ they said, to me, right there in the room, they said, ‘Saw’ and ‘Hostel,’ you’re just killing a guy. The fact that your violence is personalized—and I said, the fact that we bother to develop the characters and have characters good at inhabiting them, and creating people you might care somewhat about, is working against us? And they said, yes. Point blank.”