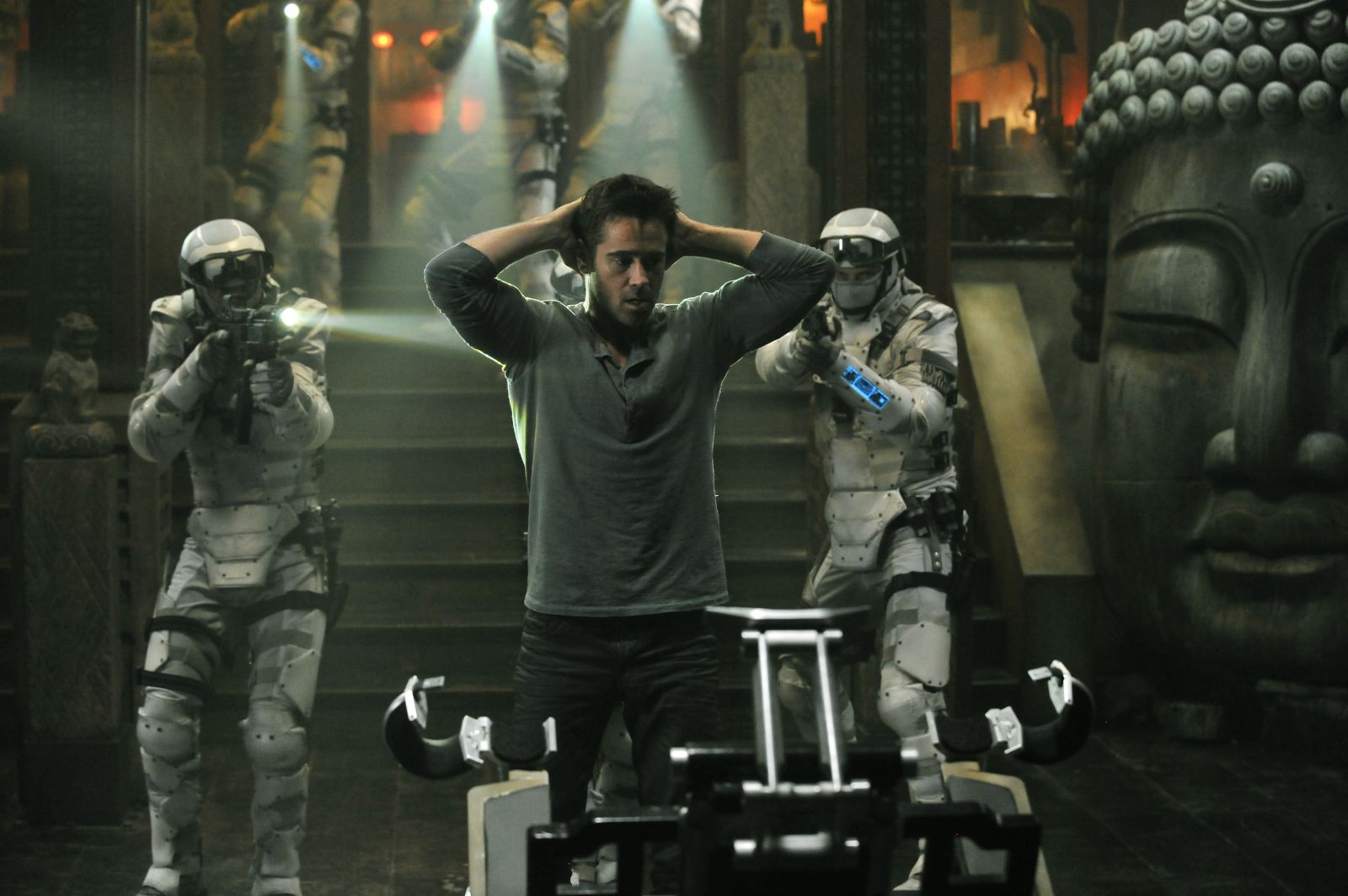 “Animatics” are a tool used to previsualize special effects, and watching the lightly-likable futuristic sketchbook “Total Recall,” and each of its successive action setpieces as Colin Farrell’s factory worker is thrust into a counterespionage-agent counter-reality, I felt as if Len Wiseman had directed the year’s most excellent animatic, as well as the prettiest dystopia since the first half of “Wall-E.”  Workers commute in an overpopulated future through the core of the earth—”prepare for gravity reversal”—from Colonies sketched from the “Blade Runner” playbook to a cordoned United Federation of Britain, with buildings and flyways and green spaces stacked to implausible heights, as much amusing doodles as feasible structures. Like a later sequence involving elevators that move through myriad shafts both laterally and vertically, the effects are sketches, with an acquaintance with, say, Jean “Moebius” Giraud, Lebbeus Woods and M. C. Escher, but no great push toward adding inspiration to the neat, casually derivative basic design. (Similarly, the implication of a technocrat’s wet dream of a surveillance state is brushed in without undue comment; “Trust me” is used as expositional grout more than once.) The slums of the Colony are a seriously degenerate Macau, and bluish neon reflected off sewage-green-mottled concrete is de rigueur, and splashes of neon in Chinese and Cyrillic make attractive décor. However advanced the computer technology seen centuries forward, one thing hasn’t changed: pocket bombs with visible digital countdowns. Plot? Not so much. After missing a promotion, handsome, capable Farrell, seen reading a weathered paperback of “The Spy Who Loved Me,” seeks out “Rekall,” where memories can be bought, and wires are crossed: is he really the double agent he wanted to pretend to be? (Press Red for Level One.) Wife Kate Beckinsale turns out to have her own extra levels, and once on the other side, Jessica Biel is another spy with a past. There will be running. There will be kicking. And some shooting. With Bill Nighy, Wiseman’s lucky charm in the “Underworld” movies, as a dour rebel plenipotentiary and Bryan Cranston as Chancellor of all United British Federation. Drawn from Philip K. Dick’s short story, “We Can Remember It For You Wholesale” by screenwriters Kurt Wimmer (“Salt,” “Equilibrium”) and Mark Bomback (“Unstoppable,” “Live Free or Die Hard”), with a credit to Ronald Shusett & Dan O’Bannon, writers of Paul Verhoeven’s 1990 adaptation. 118m. (Ray Pride)