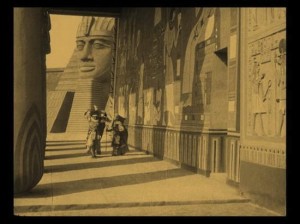 (Das Weib Des Pharao) “The Loves of Pharaoh” is a small gem from silent cinema, a no-longer-lost 1922 Ernst Lubitsch melodrama, restored and shown in DCP 2K video with Emil Jannings as a tyrannical Egyptian Pharaoh who throws over his kingdom for a Greek slave girl. While opening scenes seem as concerned as German ideas about fabric and costume design of the film’s era, complications between characters emerge and the scale and scope of the film widens to impressive effect. Crowd scenes, battles and even pillage take place under the impassive gaze of a full-scale Sphinx. There are any number of unexpectedly stunning moments. (Some of the crew wound up working on even larger projects like Fritz Lang’s “Metropolis,” with its much more rigid design.)  Produced just before Lubitsch’s move to Hollywood, this version includes the original tinting and a new recording of Eduard Künneke’s original orchestral score, also recently rediscovered. Of course, movies made today won’t have even the dignity of turning to dust, let alone being arduously reconstructed by scholars and technicians in decades hence. They’re just digital files, or as someone said of PIXAR movies: they’re not films, they’re just one long number. With Dagny Servaes. 100m. (Ray Pride)

“Loves of Pharaoh” plays Sunday and Tuesday at Siskel. A trailer is below.