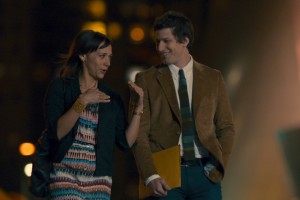 Sweet, sad, sarcastic, moony, melancholy and mostly marvelous, “Celeste and Jesse Forever” is a little bit of a lot of things, but it’s mostly its own romantic beast, and it’s a splendid starring role for co-writer Rashida Jones, as well as a co-starring role for Andy Samberg of weight and charm that I would never have expected. The behaviors are as recognizable from people you know as from movies that have worn the idea of romantic comedy to a dull nub. Among influences Jones cites are “When Harry Met Sally…,” “Manhattan,” “Annie Hall,” and “Broadcast News,” romances about intelligent grown-ups sometimes doing the daffiest things in the face of romance. (There’s a touch of rom-trauma to the broken-heart enterprise.) Jones and Samberg were high-school sweethearts, are the best of friends, but they’re also dragging their heels about a divorce: he’s stalled as an artist, she’s co-owner of a trend agency with her gay best friend (Elijah Wood, more chirpy than puppyish) and has just published a book about sham fashions, “Shitegeist.” They share juvenile private jokes, she smokes madly, tries to be on top of it all, marijuana is all over the place and there are grand gusts of verbal fuckery. Sony Pictures Classics distributes; there’s enough ribald and grown-up stuff for any of the major studios to slink away with a whimper. An autoerotic war correspondent is but one WTF burst of weirdness. Celeste wants to control: “She’s pretty, she looks like a young me,” she says of a woman Jesse admires. They both attempt to date, and the subjects include Chris Messina, whom Celeste cuts down with a litany of cultural descriptions the likes of which have not been heard since Woody Allen’s Alvy Singer reduced Carol Kane’s character to an eager cultural stereotype. Among the fresh genre of location-strewn Los Angeles-set romantic comedies, like “Ruby Sparks,” that have been shot with digital capture (both these movies with the top-of-the-line Arri Alexa camera). Skin textures can be startlingly beautiful, and the lights of a city by night dazzle sufficiently, rippling wild, that an editor may have to choose less-dazzling shots to keep from distracting from the story. Emma Roberts is keen as a too-young pop star Celeste represents, then befriends: she delivers the line “Contempt before investigation: That’s your dark little prison!” with smarts and brio. Co-writer Will McCormack is terrifically odd and funny as the dealer who wishes he were a teacher of children instead of the keeper of “happy smoky green treats.” I like these people. I like this movie. I can’t even start on Jones’ freckles.  Lee Toland Krieger directed. With Ari Graynor. 91m. (Ray Pride)