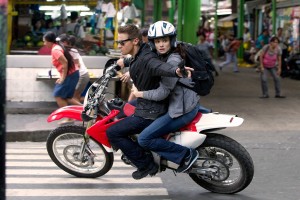 “You break it, you bought it, was ever thus.” So is this “The Bourne Necessity”? After infighting with the studio, director Paul Greengrass, screenwriter Tony Gilroy and star Matt Damon had walked away from the embers of the “Bourne” trilogy. How to sustain a series when there are no more Robert Ludlum books and your star is elsewhere? Cannily, cleverly, Gilroy realized that a rogue operation in the surveillance state would be one among many, many more: “Treadstone” is not singular. Enter “The Bourne Legacy”: rogue agent Aaron Cross (Jeremy Renner), racing to escape extermination after the sudden end of an initiative dabbling in programmable behavior and neural design of undercover agents. He can’t but run: as another figure says, “Aren’t we wired to stick our nose in, you and I?” Rachel Weisz plays one of the doctors on the project who escapes from a massacre by, wouldn’t you know, a lone gunman who wipes out a suburban lab?  The setpieces of “total security awareness” have a cold thrill to them, both as evocation of the particulars of a vast surveillance state turned toward its citizens and as cautionary tale. A scene with drone operators casually making the calculations thousands of miles away to fire multiple missiles to execute the order to murder an American citizen. “Morally indefensible and absolutely necessary,” a boss says. Edward Norton, Jr. is the prime technocrat, racing from situation room to situation room to sift through the vast amounts of data being streamed into the frame, a soup and a sea of surveillance images high and low, from gas station bays to Canadian forestry satellites. “I don’t make policy”; “Nah, you just load the gun.”  The closest thing to a false note is a spy boss, slurping booze late at night, worrying, “You want to wake up and see this on CNN?” A YouTube glimpse of other bureaucrats at a secret meeting makes a lot more sense in the twenty-first century than little-watched yap by Wolf Blitzer types as reason for the bosses to “burn the program to the ground.” Turn to the press? “Could you ever say it loud enough or fast enough that they won’t finish what they started?” (We see WashPost emails being intercepted, read: it’s decades beyond the end of “Three Days of the Condor.”)  Restrained production design works with the same level of implication as Gilroy’s metallic-tang dialogue; for a second, in a remote mountain cabin, among weapons and foodstuffs, a Farsi phrasebook is visible; a glimpse of the Washington Post actually looks like a real newspaper instead of a lazy mock-up. The chase heads west to the Far East, vectors of paranoia converge. Cross is a different character from Bourne, with a different range of moral implications. Banality and overkill mesh: all the more believable, and in the pulse of the moment, an awful lot of first-rate action filmmaking. Cinematographer Robert Elswit’s credits include Gilroy’s “Michael Clayton,” “Salt,” “Mission: Impossible – Ghost Protocol,” “Magnolia” and “Syriana.” With just enough glimpses of flinty Scott Glenn, Stacy Keach and David Straithairn. 135m. (Ray Pride)

“The Bourne Legacy” opens Friday. A clip is below.