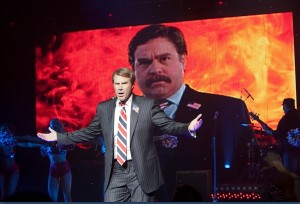 Unlike war and mudwrestling, “politics has no rules,” pronounced one-time presidential aspirant Ross Perot in 1988. That serves as the onscreen epigraph of this light summer comedy, a letdown that obeys the laws of topical comedy. “The Campaign” softly tweaks safe targets like Sinophobes, Serb-profilers and the Koch brothers. Congressman Cam Brady (Will Ferrell) is coasting to an uncontested fifth term when he misdials his mistress Shana and leaves a naughty message on the phone machine of a fundamentalist family at dinner-time: a come-on to “lick each other’s buttholes in a Denny’s bathroom.” His poll numbers plummet so his corporate backers, the Motch brothers (John Lithgow and Dan Aykroyd), finance a non-entity to run against Cam Brady. Marty Huggins (Zach Galifianakis) is a pudgy, pug-loving Director of Tourism of Hammond, North Carolina with no prior political record. The ensuing campaign contains good lines (“Filipino Tilt-a-Whirl operators are America’s backbone”) but hardly questions politics as usual. Can “The Campaign” even qualify as bipartisan if “Republican” is only heard once and “Democrat” never? The only named politicos, apart from Perot, are TV pundits and personalities appearing as themselves. Screenwriters Chris Henchy and Shawn Harwell reword the real state motto of North Carolina (Esse Quam Videri, “To Be, Rather Than To Seem”) as if acknowledging “The Campaign” is not the political comedy it seems to be. Director Jay Roach (“Meet the Fockers,” “Austin Powers”) steers straight down the  middle-of-the-road with his corny handling of a last-minute plot turn: Marty triggers an outbreak of truth-telling that heals almost all with honesty. The use of “Azz And Tittiez” by Hypnotize Camp Posse, I concede, adds a measurable up-bump in the film’s poll numbers. With Jason Sudeikis, Dylan McDermott, Katherine LaNasa, Brian Cox, Karen Maruyama. 97m. (Bill Stamets)