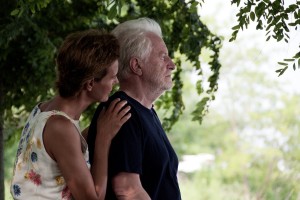 (Impardonnables) The compelling, intricate dramas of André Téchiné are filled with felicities, oddities and heightened emotions. In “Unforgivable,” the sixty-nine-year-old writer-director (“The Girl on the Train,” “Witnesses,” “Wild Reeds”) follows blocked novelist Andre Dussollier to Venice where things become even more blocked after he meets real estate agent Carole Bouquet. Blocked, confronted by the romantic misprisions of the past, yet always zooming forward along the ancient city’s mute waterways. The story unfolds without signposts and undue exposition: you’re figuring out who means what to whom even as the characters themselves do. Téchiné’s a filmmaker who moves with the undercurrents of story and implied conflict, and the precision of his camerawork, including framing and motion, is sharp enough to cut glass. Moment to moment, each of “Unforgivable”‘s overreaches if forgivable in the confident, elegant moment. With Mélanie Thierry, Adriana Asti, Mauro Conte. 111m. (Ray Pride)