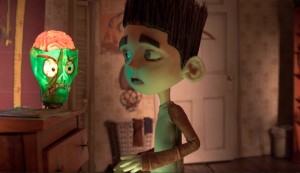 This fun, if formula-bound kids’ tale employs the same snappy 3D stop-motion animation seen in “Coraline” (2009). Instead of an eleven year-old girl seeing the dead and dealing with a supernatural female, “ParaNorman” shows an eleven year-old boy doing the same. Norman (voiced by Kodi Smit-McPhee, “Let Me In,” “The Road”) is the typical outcast coping with all the usual character types, from an illiterate bully to his ditsy big sister. Our misunderstood hero is a horror film buff who watches lots of TV. On the couch sits the chatty, dotty spirit of his late grandmother (Elaine Stritch). He is a letdown to his dad. The stereotypical fat kid is his only living friend. Norman greets all his dead ones on the way to school. Note the seabird ghost strangled with a plastic six-pack holder, and the dog “run over by an animal rescue van… tragic and ironic.” Norman lives in Blithe Hollow, a New England town with the tacky tourist come-on: “A Great Place to Hang.” The 300th anniversary of a 1712 witch-hanging looms. Norman learns from his dying weird uncle that he must assume the mantle of a secret family lineage. His task is talking to the hung witch Agatha to keep her and her seven zombified jurors in their place. Action sequences ensue. Good-for-you truisms come too: “there’s nothing wrong with being afraid as long as you don’t let it change who you are.” Looks like writer Chris Butler and co-director Sam Fell (“The Tale of Despereaux,” “Flushed Away”) overcame any fear they’d change the uplift agenda of almost every other animated film about eleven-year-olds made for the same. With the voices of Tucker Albrizzi, Anna Kendrick, Casey Affleck, Christopher Mintz-Plasse, Leslie Mann, Jeff Garlin, Bernard Hill, Jodelle Ferland, Tempestt Bledsoe, Alex Borstein, John Goodman. 92m. (Bill Stamets)