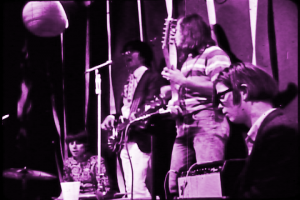 The Chicago Film Archives, an organization striving to preserve  films with a Midwestern bent, will host its first annual media mixer on August 17. Aiming to “repurpose vintage footage for current artistic expression,” collaborative video pieces created by three video/film artists and three audio artists will premiere at the mixer. Catching up with collections manager Anne Wells offered a glimpse into the night’s conception.
How did the idea for this type of event come to fruition?
The idea came about thanks to CFA friend and renaissance man, Mike Reed, who energized our thought processes regarding the event. We all thought it would be more fun and unique to involve local artists in the event, by having them create a video piece using footage from our collections. More specifically, we asked three artists to make a short video piece using footage from CFA’s collections and then had them turn that piece over to a musician or group that then scored the piece. Local nonprofit Experimental Sound Studio donated recording and mixing time to the three musical acts involved in this project. Overall, this project is a great way to showcase our varied collections and to show how these collections can speak to a variety of different purposes and ends.
How did you go about securing the artists? Were they in mind first or were they called upon once the event was drawn up?
After coming up with the event’s concept “Media Mixer,” we compiled a huge list of our favorite local filmmakers and musicians, and just started asking around to see who was up for the project. Thankfully, some of the first people we asked agreed to help out. As soon as we locked the artists down, we then considered what filmmaker/musician combinations would be most interesting, and we went from there.
Do you plan on executing the event in the future? Will this depend on the success of tomorrow evening?
We sure hope so! The idea is to continue with “CFA Media Mixer” on an annual basis. Through such creative-based projects or events, we hope to make the archive accessible and available for a variety of different purposes. We want to make our incredible films and collections speak to a new generation of viewers and to, hopefully, inspire artists. I also don’t want to sneak around the fact that this event is not just a celebration of local talent, but also a benefit and awareness-raiser for CFA. CFA is dedicated to expanding the audience for the Midwest’s collective cinematic heritage, and we hope these events inspire others to assist us in these efforts.
Participants may enter a raffle for prizes from local businesses such as Labrabbit Optics, tickets to see Yo-Yo Ma or the opportunity to watch CFA stock footage. Local DJs will entertain the nearly hundred attending guests from “10:30-whenever.” (Jenny Yoon)
Friday, August 17, at The Hideout, 1354 West Wabansia, 8pm-midnight, $15, 21+