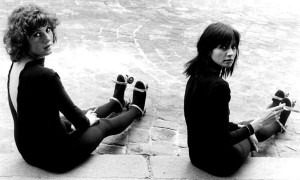 There’s a murky ancient VHS edition as well as unofficial DVD copies of “Celine and Julie Go Boating” (1974), Jacques Rivette’s playful, indelible haunted house of theater, cinema and larky lady magicians in one inexhaustible encyclopedia cornucopia. But, rather than relying on memory (or the rotten copies), I’d hoped the film would be available for preview before press time, but alas. From me, here’s a strong recommendation: I didn’t want to spoil my exposure to the fresh 35mm print, and I’ll be seeing it later this week with what I expect to be at least one very attentive audience.  A couple of notes from Rivette, from the long out-of-print “Rivette: Texts and Interviews,” edited by film scholar Jonathan Rosenbaum, notes that the film, like much of his 1970s work, was shot in 16mm. “Contrary to what some critics… thought, our ambitions weren’t along the lines of parody, but rather a pastiche of an old-fashioned sort of cinema, for instance, the use of wide angles and deep focus… You might almost say that I am trying to bring back MGM Technicolor! … There is almost no improvisation, the scenes were carefully constructed beforehand, and the racy, zigzag character of the film is completely premeditated.” With Juliet Berto, Dominique Labourier, Bulle Ogier. 193m. (Ray Pride)