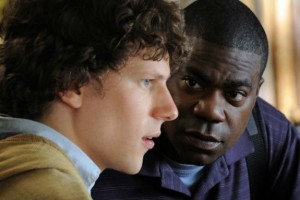 Philip Dorling and Ron Nyswaner’s “Why Stop Now?” seems like one of lead actor Jesse Eisenberg’s occasional one-for-me performances, playing Eli, a purported piano prodigy with a cheerful but drug-addicted mother, Penny (Melissa Leo). While it shares those elements with James Toback’s coruscating gangster-sex melodrama “Fingers,” this one’s not a drama, but instead a comedy, after a fashion, with Tracy Morgan as his mother’s magical drug dealer, Sprinkles. Because of a bureaucratic rule, Eli and Sprinkles have to get Penny high one more time before she can be admitted to rehab so her urine sample is sufficiently dirty. But! Eli has a very, very, very, life-changing, very important audition he cannot miss! The performances are nearly as inauthentic as the premise, with the ever-voracious Leo chewing up not quite enough of the scenery to vanquish her scenes. Tonally, “Why Stop Now?” is a richness of embarrassments. A Sundance 2012 entry. With Isiah Whitlock Jr., Paul Calderon. 87m. (Ray Pride)

“Why Stop Now?” is now playing Facets. A trailer is below.