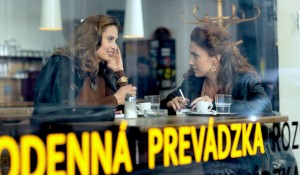 A glittering, inexplicable trainwreck, Fernando Meirelles’ “360,” the Brazilian director’s first feature since 2008’s drab downer, “Blindness” is a song of décor and reflection, of light and sound design: the artful and artless in overstuffed array. Drawing, foolishly, fatally, on Arthur Schnitzler’s “La Ronde” (1897), a play that moves from low to high in Viennese society through a sequence of sexual transactions, screenwriter Peter Morgan (“The Queen,” “Hereafter”) offers Meirelles a template for noodling over the glitter and grime of contemporary Europe. It’s a story format that could allow anything, but not just anything. Less than three minutes in, wet European streets are effaced by the gravel-grind of meaningfulness of Tom Waits and the worlds of “This kiss.” (I think this is the moment I wrote DEAR GOD in my notebook.) There’s a score that would make Raymond Scott giggle like someone’s tickle-tickling him in the kidneys, in between meaningful strums of winsome minor-chord ballads and Portuguese-language saudade. Somebody’s suffering high-functioning iPodder’s syndrome.  It’s easy to be transfixed if not seduced by the cumulative oddness; not of narrative choices, necessarily, but narrative clumsiness and myriad peculiar bits of behavior and gesture. Like Wim Wenders’ fine “The American Friend,” split screens and surveillance cameras are suggestive of the anonymity and paranoia of the city, but his 1977 film is a diamond beside this bauble. Phone stalking and farewell notes in the form of full-screen AVIs on iMacs are contemporary, if not precisely modern. There are glimpses in Vienna, Paris, London, Bratislava, Rio, Denver and Phoenix of streets and lit windows that remain unexplored. Everywhere, there are genteel reflections and refractions on intermediate layers of glass. There’s more reflective glass and cut glass than a turn-of-the-century Viennese bakery. Snowflakes fall. A great, sober actor babbles a monologue about loss at an AA meeting, bringing heart where there should be none. (Hey, Sir Anthony, how ya doin?) Other than Hopkins, the actors play in keys of discomfort, notably Ben Foster, allowed free rein to his worst instincts as a Colorado sex offender with a worse haircut than usual and a “COYOTE” tattoo. The movie’s about yearning, truly: yearning for projects like this bearing so much hope and intent not to detonate with such a succession of muffled sounds. With Jude Law, Rachel Weisz, Moritz Bleibtreu, Danica Jurcová, Jamel Debbouze. 110m. Widescreen. (Ray Pride)

“360” is now playing at Landmark Century. A trailer, showing off the handsome production, is below.