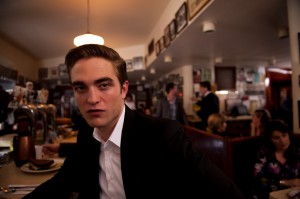 “What does it mean to spend money? A dollar. A million.” With “Cosmopolis,” David Cronenberg and Robert Pattinson create a day in the life as they hop into the soundproofed pages of one of Don DeLillo’s minor novels and wreak a compelling, if detached succession of compartmentalized dream-scenes about the fall of money. Cronenberg adapted DeLillo’s 2003 novel, which, while looking back to September 11, 2001, is oddly prescient about 2008 and 2012 as well. It’s unapologetically cerebral stuff. The dialogue, esoteric, hermetic, unwieldy, is drawn almost entirely from DeLillo and it’s a thrill to hear the writer’s gnomic interior-monologue-spoken-aloud staccato brought to life by good actors, which include Pattinson, cool and damped as Eric Packer, a twenty-eight-year-old billionaire asset manager who senses the pixels and numerals seeping from his stratified, Ponzified, algorithmic mastery of rarefied fiscal air. He’s made an ungainly bet against the Chinese yuan, and wants only to cross Manhattan in his white stretch limousine, armor-plated, “Prousted” with cork, to get a haircut from his old barber. Outside, the President’s visit has further snarled traffic, and protesters armed with rats, spray paint and the Communist Manifesto-derived slogan, “A spectre is haunting the world.” (Marx and Engels referred to communism as the spectre; capitalism is the C-word here.)  “The more visionary the idea, the more people it leaves behind,” says Samantha Morton as Packer’s “Chief Of Theory,” one of his cohort that intermittently join him in the crawl across the island. “This is what the protest is all about. Visions of technology and wealth. The force of cyber-capital that will send people into the gutter to retch and die. What is the flaw of human rationality? It pretends not to see the horror and death at the end of the schemes it builds. This is a protest against the future. They want to hold off the future. They want to normalize it, keep it from overwhelming the present.” (A clip of the speech is here.) Cronenberg is a master of making things seem ever so slightly strange, ever so slightly off-kilter, a characteristic he shares with other Canadian contemporaries like Atom Egoyan, Sarah Polley, Don McKellar and, certainly, Guy Maddin. Cronenberg unabashedly shoots Toronto as New York City, with discernible brand names and architecture looking wholly unlike Manhattan. (Even the green-screen streetscapes that sidle past behind and beside the passengers in the limo have a Canadian scent.) It’s not quite the alienation effect the words could have on most audiences: Cronenberg’s bone-dry humor is largely invested in the song of the raised voices of world-striding everything-nothingness. My only reservation of the entire Cronenbergian enterprise is how its climax, amid the detritus of a warehouse floor, smelly and untidy with 1970s-style office equipment, doesn’t punch its way into something even more fantasticated. With Juliette Binoche, Sarah Gadon, Mathieu Amalric, Jay Baruchel, Kevin Durand, K’Naan. Cronenberg’s usual cinematographer, Peter Suschitzky, captures gloom and gleam with digital cameras for the first time; Cronenberg has joked he will miss only the smell of a fresh-cracked can of Kodak stock, and he can get an air freshener for his car for that. 99m. Reviewed in 35mm. (Ray Pride)