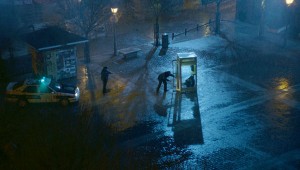 Bart Layton’s highly-regarded documentary debut after working in reality television, “The Imposter” wields an assured, stately vibe of inauthenticity from its first scenes, coming across as the wicked stepchild of Errol Morris and the Coen brothers (influences the filmmakers cite readily). Still, most of the Coens’ fictions seem truer than the fact-fiction of the British director’s film, an inherently deceitful congeries of false narrators; the filmmaker is, of course, caught up in his fun. He draws on re-creations with production work by hands involved in Almodóvar’s “Broken Embraces” and the Coens’ “No Country For Old Men” and two days of interviews with Frédéric Bourdin, a chameleonic serial imposter and con-man who posed as con-kid into his twenties. Despite looking nothing like a Texas teen runaway, Bourdin insinuated himself into the missing boy’s family in 1997 and later served time for impersonation and falsely obtaining a U.S. passport. According to “The Imposter,” Bourdin turned on the family. On camera for two days, the subject’s direction seems to have consisted of “look meaningfully toward the camera,” “leer,” “leer again.”  “The Imposter” is so intent on portraying Bourdin as a viper, the movie itself plays like a con: a con about a con about a further con but in fact is itself fast and loose with the parceling of information. It’s enough to make you feel sympathetic for Bourdin, who, in his arrests since childhood, didn’t fear the law, and foolishly, didn’t fear the camera of a stranger, either. The last shot is magnificent, arch, belonging to another movie, a variation on the whole of “Blood Simple.” Ripe, planned, posed, crafted, fake, a crane shot that peers over two men with earth-rending hand tools, peering into a loamy, grave-size hole they’ve dug out from under a bush, indicates a splendid imminent career in fiction features for Layton. He’s going to be so good, unshackled from illusions of truth. (There’s also a shot of Bourdin dancing spasmodically in a gym, of uncertain provenance, which, however inadvertently, parallels the transcendent final scene of Claire Denis’ “Beau Travail.”) Last week, Bourdin’s Twitter account—accepting that it’s his—offered these wishes: “Bart Layton, I like you as much that Mark David Chapman liked John Lennon and Charlie Parker [the on-screen cartoon of a private detective], I’ll be glad when you are dead…”  99m. (Ray Pride)

“The Imposter” is now playing at the Music Box. The U.S. trailer for the film is below.