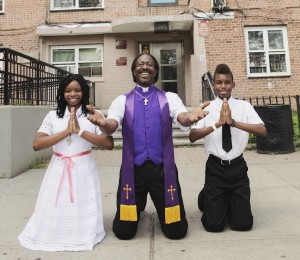 “By any means necessary” has been the motto of Spike Lee’s film production company, 40 Acres and A Mule, from its inception, and “Red Hook Summer,” his first feature since 2008’s “The Miracle at St. Anna,” abides by that determination. Working outside studio finance with his own money, and participating in the film’s distribution, Lee works at speed if not maximum efficiency. Flik Royale (Jules Browne) is his young protagonist, a boy sent north by his mother from “Hotlanta” to Red Hook, Brooklyn to spend the summer with his grandfather, The Good Doctor Bishop Enoch Rouse (Clarke Peters). The resentful Flik wields a shield against the world, his “iPad 2,” as he will tell anyone, using the device as a camera. (But the neighborhood’s cranky old alcoholic does admit, “You wanna take a picture of dead things, you in the right place.”) Rouse’s shield against the world is a voice raised to heaven, and Peters brings ire and fire to the litany of the world’s shortcomings enumerated in his sermons. The storytelling is also a kind of enumeration, earnest and sincere, but with the dramatic focus shifting uneasily from moment to moment. There’s no real reason for Flik to be in Brooklyn: he’s simply dispatched. (“You gotta compromise, he’s old school,” his mother hectors him via Facetime, between iPad and iMac.) It’s a simple thrill to see Lee repeating strategies, such as constant overlays of music, weaving strands as if they were sound design instead of multiple sorts of anthems, but the familiarity isn’t always to the good. Shooting in low-fidelity digital, and lacking the gleam and good looks of earlier movies shot by Ernest Dickerson (“Do the Right Thing,” “Malcolm X”) and Matthew Libatique (“The Inside Man”), the co-writer-director goes for speed and fire with a gun-and-run three-week shooting schedule. (It’s wan-looking compared to the New York of Dee Rees’ “Pariah,” which Lee executive-produced, and the bold colors on screen, akin to those in “Do The Right Thing” fail to pop off the screen.)  Lee’s signature shot is a man attached to a moving cart, stationary center frame in relation to the camera as the world moves behind him. In “Red Hook,” the moment is not meditative, but a movement toward the film’s greatest explosion of drama and rage. At the momentous Sundance 2012 premiere of a longer version of “Red Hook Summer,” audiences were divided and the discussion heated: there is a combustible turn of events as bold and declarative as Rouse’s lectures-cum-sermons. But when that ugly thing happens, an unforgivable thing, a sin and a lie and a criminal transgression, Flik is hardly changed: it’s part of the disappointment of the greater world. “Beware of false prophets that come to you in sheep’s clothing,” Enoch rails at one point, a high angle shot rising above his purple raiment, and in the place of pupils, he has crucifixes of white light. “Oh, the ravening wolves,” indeed. Mookie, Lee’s character from “Do The Right Thing,” shambles into a couple of scenes, grizzled, beat-down, still delivering pizza. Mookie gazes into the camera as if staring out from an Orthodox icon. What does he see? His expression is blank. 121m. (Ray Pride)

“Red Hook Summer” is now playing at River East, Crestwood, Chatham and City North. The official trailer is below.